Maddow On Palin’s New Ad: She’s Trying To ‘Up Her Fees For The Bowling Conventions Of America’ 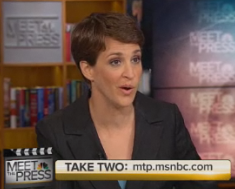 Every time Rachel Maddow is on Meet the Press I am puzzled that no one has given her a Sunday morning show of her own. Not that her regular MSNBC show isn’t great. But watching her showcase her ‘serious journalist’ chops makes for compelling, and necessary, TV. Not to mention her short exchange (confrontation?) with Harold Ford today over tax cuts he once proposed for New York State showed her to be more willing to get in guest’s faces than David Gregory, which, suffice to say, is a refreshing change.

Fortunately, MTP devoted some “take two” time after the show to talk to Maddow further about her recent trip to Afghanistan as well as her views on everyone’s favorite speculative topic: Sarah Palin for President.

Earlier on on the regular show Maddow had remarked that the aspect of her visit to Afghanistan that had struck her the most was “how humbling it is to be there alongside U.S. troops that are doing such unbelievably difficult work and who are such professionals. Honestly, not to be sappy, but that’s the first thing.” The second was the heat. Afterwards she had this to say about the Catch-22 situation America currently finds itself in:

It really became clear to me that there is this transactional cost of us staying. Every additional week that we stay we are affecting Afghanistan with our presence, even in ways we’re not trying to. All of that money goes to all of the places you’d expect it to go to in a place that has a really broken civil society…[At times] it is our very presence that it undermining our purpose.

As for Sarah Palin’s ‘Mama Grizzlies‘ web video, Maddow thinks Palin is merely trying to “up her fees for the bowling conventions of America.”

She makes some good points to back this up. Watch below.