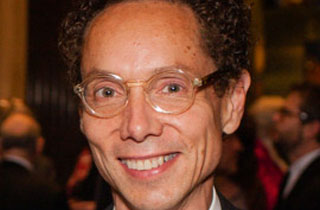 After taking down BuzzFeed’s Benny Johnson for plagiarism, and embarking on a quixotic quest to get Fareed Zakaria fired for the same offense, Our Bad Media have accused another popular author of copying without attribution: the New Yorker‘s Malcolm Gladwell.

Well, technically, it’s not plagiarism in the sense that Gladwell lifted entire passages from other writers without attribution, but Crushingbort and BlippoBlappo, the two anonymous ethics robots behind the site, detail how the Blink author borrowed stories and anecdotes from other sources, without actually talking to them.

For instance: in a story he wrote about Apple founder Steve Jobs, Gladwell referred to an incident in which Jobs wheedled Xerox executives into letting him into their research facilities, and cited a Xerox engineer named Larry Tesler. “If you read Gladwell’s article — and noted how ‘Tesler recalled’ the story of Jobs’ reaction to no one in particular — you’d naturally assume that Gladwell had interviewed Tesler himself,” OBM writes. “He didn’t.” Instead, he lifted the story, complete with similar phrasing and details, from a 1988 biography written by “Steve Jobs expert Jeffrey S. Young.”

There are more examples, but the irony of their accusation stems from Gladwell’s own condemnation of this practice, who said this in an article about plagiarism written in 2004: “Borrowing crosses the line when it is used for a derivative work. It’s one thing if you’re writing a history of the Kennedys, like Doris Kearns Goodwin, and borrow, without attribution, from another history of the Kennedys.”

(The article in question dealt with Gladwell’s experiences in being plagiarized, when a successful Broadway play lifted and tweaked passages from an article he wrote in 1997. So.)

UPDATE (3:24 PM EST): We received the following statement from David Remnick, editor in chief of the New Yorker:

“The issue is not really about Malcolm. And, to be clear, it isn’t about plagiarism. The issue is an ongoing editorial challenge known to writers and editors everywhere — to what extent should a piece of journalism, which doesn’t have the apparatus of academic footnotes, credit secondary sources? It’s an issue that can get complicated when there are many sources with overlapping information. There are cases where the details of an episode have passed into history and are widespread in the literature. There are cases that involve a unique source. We try to make judgments about source attribution with fairness and in good faith. But we don’t always get it right. In retrospect, for example, we should have credited Miles Wolff’s 1970 book about Greensboro, because it’s central to our understanding of those events. We sometimes fall short, but our hope is always to give readers and sources the consideration they deserve.”