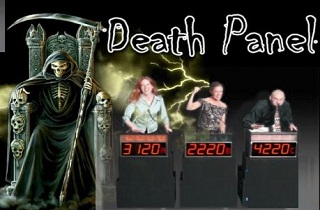 Time magazine scribe and Obama dick-whisperer Mark Halperin took to the airwaves Monday to troll Obamacare by agreeing with Newsmax TV‘s Steve Malzberg that “death panels” (remember those?) are definitely coming, and that President Obama is a big fat liar. I’m paraphrasing, of course, but if you look a little deeper into Halperin’s puddle-shallow commentary, it sounds more like Mark Halperin supports death panels, not President Obama.

Before you consider Halperin’s commentary, it’s important to remember how the conservative media, followed by the mainstream “villager” media that Halperin represents, have tried to define down Palin’s original “death panel” claim, which was that her specific baby would be forced to “stand in front of Obama’s ‘death panel’ so his bureaucrats can decide, based on a subjective judgment of their ‘level of productivity in society,’ whether they are worthy of health care.”

There was, of course, no part of that claim that was remotely true, but the media tried its damnedest to give Palin the benefit of the doubt. Maybe she meant payment for end-of-life care counseling, which is also not a “death panel” and is already a thing, yeah, that’s the ticket. Or maybe she was referring to the Independent Payment Advisory Board (IPAB), which the law says “shall not include any recommendation to ration health care, raise revenues or Medicare beneficiary premiums under section 1818, 1818A, or 1839, increase Medicare beneficiary cost sharing (including deductibles, coinsurance, and co-payments), or otherwise restrict benefits or modify eligibility criteria.”

Or maybe she meant transplant committees, which are also already a thing.

For Halperin’s purposes, “death panels” appears to be a reference to health care “rationing,” as Malzberg tells Halperin that “I think they focus on the death panels which will be coming, call them what you will. Rationing is part of it.”

“I agree,” Halperin agrees. “Huge. It’s going to be a huge issue, and that’s something else about which the President was not fully forthcoming and straightforward.”

Just in case people might think he was pulling a fast one on Halperin, Malzber confirms “Alright, so you believe that there will be rationing, AKA death panels.”

“It’s built into the plan,” Halperin affirms. “It’s not like a guess or like a judgment. That’s going to be part of how costs are controlled.”

Now, health care “rationing” is a very broad concept that includes the very idea of paying for healthcare, which forces patients to ration their own health care based on cost, but which also includes things like denying care that is medically unnecessary or inappropriate. After emphatically agreeing that Obamacare is a deadly death-panel lie, Halperin points out that rationing is already here, and he loves it. “We do need to do have some of that in this country, because we can’t afford to spend so much on end-of-life care. A very high percentage of our healthcare spending is for a very small number of people at the last stages of their life. I’m not saying the system shouldn’t allow that, but there’s too much cost. There are judgments have to be made.”

“Made by who, Mark? Mark, made by who? The government?” Malzberg asks.

“By individuals. No, by individuals,” Halperin replies. “And health insurance companies.”

Unless I’m hearing things, Halperin seems to support ramping up denials of care to cut costs, which Obamacare does not do, and prefers to have those decisions made by corporations who have a strong incentive to increase profits by cutting costs in just this way. Since Obamacare is provided by private health insurance companies, though, he’s got little to worry about. They’re still calling the shots, but the law at least extends coverage to millions more people, and protects patients from the worst insurance company practices.

Halperin’s lie that President Obama was “not fully forthcoming and straightforward” about this issue is betrayed by the fact that Halperin is practically quoting the President to Malzberg. “End-of-life care is one of the most difficult sets of decisions that we’re going to have to make,” the President told the House Republican Issues Conference in 2010. “I don’t want bureaucracies making those decisions, but understand that those decisions are already being made in one way or another. If they’re not being made under Medicare and Medicaid, they’re being made by private insurers.”

So, in summary, it turns out that Mark Halperin is the liar who loves death panels. Twist!

Of course, Halperin will be rewarded by right-wingers for this, and liberals already ignore Halperin, so there’s really no downside for him. The millions of people who will benefit from Obamacare, however, can’t say the same.

Here’s the clip, from NewsMax TV:

Update: From a Time Magazine spokesperson:

In Mon intv I did not say “death panels” nor do I believe ACA contains them. Was speaking of political/policy challenge of IPAB cuts. My bad
——-
@MarkHalperin

As you can see and hear above, Halperin agreed with Malzberg, twice, that the new health care law contains “death panels,” but it’s nice to know that this interview was toxic enough to merit such an attempted backtrack.