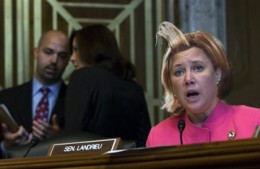 Senator Mary Landrieu (D-La) has given new, disturbing meaning to the phrase “taking your lumps.” Since striking a bargain Friday that brought $300 million in federal aid to her state in exchange for a vote to allow debate on a healthcare reform bill, she has been called a prostitute twice, and been depicted as a user of non-herbal “essence” hair care products. Where’s the outrage? Apparently, still stuffed into a pair of running shorts.

As Keith Olbermann pointed out on last night’s Countdown (videos below), both Glenn Beck and Rush Limbaugh have called Landrieu some form of prostitute, with Beck getting all “Mod Squad” by saying, “You’re still hookin’!”

To complete the hat-trick (or hair trick?) Time’s Mark Halperin posted a cutesy photoshop of Landrieu sporting the famous “assisted” hairdo from “There’s Something About Mary.” He’s since taken it down, but Jason Linkins posted the cached version, along with an awesome takedown of Halperin. (BTW, if you’re not reading Jason Linkins, you’re missing a full life.) ABC News’ Jonathan Karl showed relative respect for Landrieu, saying she had been “playing hard to get” on the health care bill.

When conservative women have been attacked, the right has complained about the lack of outrage from the left. Keith Olbermann even cited an example last night, as he rightly compared his own description of Michelle Malkin to the slams against Landrieu. This doesn’t get him off the hook, but certainly likening Landrieu to a spunk pinata equals or overshadows Olbermann’s insult. We’ll see how the right reacts to this.

The Louisian Democratic Party is also looking for reaction from the right, in the person of David Vitter. Clever, but it also serves to trivialize the offense.

As for Landrieu, you can disagree with the tactic of stalling such important legislation in exchange for federal funds, but it’s also fair to mention that she’s trying to make up a shortfall that was created by Hurricanes Katrina and Rita. She may be wrong to do so, but it’s not like she’s having the federal government build her a new deck or an in-ground pool. Opportunist? Maybe. Dirty, bribe-taking whore? Not quite.

Many supporters of health care reform are fed up by supposedly moderate Democrats standing in the way, but you have to say this for Landrieu: at least there is something that can be done to this bill to get her vote. The same cannot be said of the RMS (Republicans minus Snowe).