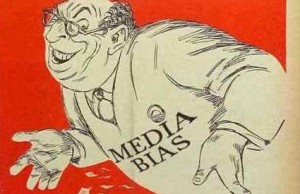 Liberal watchdog Media Matters published an item yesterday showing that Andrew Breitbart‘s Big Journalism website repeatedly published an altered version of an anti-Semitic  Nazi-era propaganda cartoon. Breitbart responded that his blog had taken down the cartoon, prior to Media Matters‘ report, when editor Joel Pollak flagged the image as possibly offensive (the cartoon remains, at this writing, on three other Big Journalism posts). Neither party is content, as Media Matters continues to pound Breitbart, and Breitbart…well, that’s where this goes to 11.

The above cartoon has appeared in four Big Journalism blog posts, all since January, and as Media Matters points out, is an altered version of this cartoon from a 1942 issue of the German Magazine Kladderadatsch (Hullabaloo): 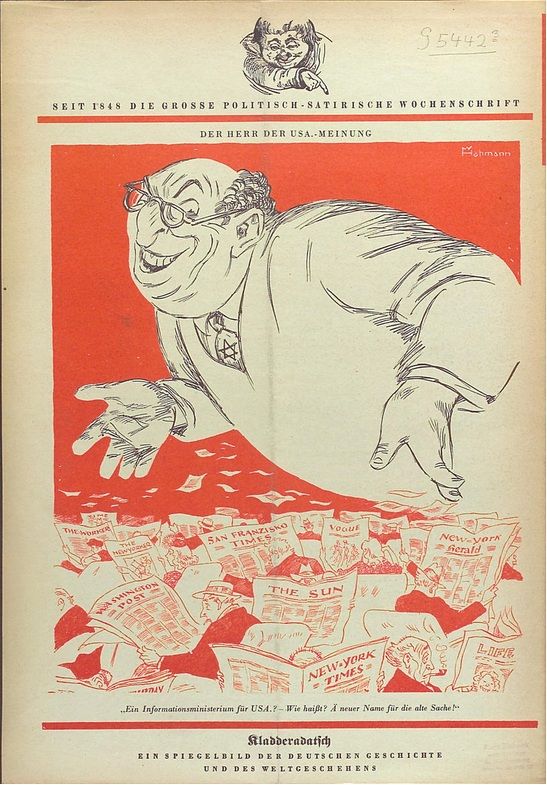 The caption translates roughly to “An information ministry for the United States. What’s the name? A new name for the same old thing.”

In the altered version, the Star of David is removed from the necktie, the caricatured hooked nose is straightened somewhat, and what appears to be a Barack Obama campaign logo has been added.

In Breitbart’s defense, his claim that the use was inadvertent is supported by the fact that the altered cartoon appeared on other blogs long before it ever showed up on Big Journalism, and several since. Some have accused Breitbart writers of “photoshopping” the original cartoon, but that appears not to be true. This is obviously an honest mistake, and once corrected and apologized for, Media Matters ought to just let up.

However, the cartoon has been in use at Big Journalism all year, even though, as Editor in Chief Dana Loesch explains, Breitbart EIC Joel Pollak was immediately suspicious of its origins when he noticed it. Loesch chalks that up to Pollak’s eagle eye, noting that “He’s an Orthodox Jew with a degree in Jewish Studies, so he tends to pick up on these things.”

Except that the dodgy stylistic origin of the cartoon isn’t all that subtle, or at least, not too subtle for the untrained eyes at Media Matters to have noticed it, and pointed it out, way back in March. Still, the continued use of the cartoon demonstrates poor editorial judgment, at worst, and an insensitivity to stereotypes that is consistent with conservative attitudes about political correctness. Their default is “Sorry, I don’t see it.”

What definitely shouldn’t happen is for anyone to say, explicitly or implicitly, that this in any way suggests Antisemitism on the part of Breitbart or his writers, many of whom are friends of mine. That’s such an inflammatory, prejudicial charge that it shouldn’t be used as some point-scoring political “Gotcha!”

Rather than simply apologize for an honest mistake, though, Big Journalism‘s Dana Loesch took the opportunity to accuse Media Matters of Antisemitism, and never actually got around to apologizing for the use of the image (which is still in use in three different Big Journalism stories).

What really takes this over the top is that Andrew Breitbart, who started out with a perfectly reasonable defense on Twitter, has now taken to invoking a despicable smear against liberal billionaire George Soros, tweeting, “I’ll apologize – again – for accidentally posting innocent cartoon w dubious origin, if George Soros publicly apologizes for aiding Nazis.”

It’s the same smear that caused the Anti Defamation League to denounce Glenn Beck. Soros survived the Holocaust because his father hid him with a Christian family, and as part of the deception, the 14 year-old Soros would accompany his guardian when he confiscated property from Hungarian Jews. Here’s what Abe Foxman, National Director of the Anti-Defamation League, said about Beck’s smear:

For a political commentator or entertainer to have the audacity to say—inaccurately—that there’s a Jewish boy sending Jews to death camps, as part of a broader assault on Mr. Soros, that’s horrific.

While I, too, may disagree with many of Soros’ views and analysis on the issues, to bring in this kind of innuendo about his past is unacceptable. To hold a young boy responsible for what was going on around him during the Holocaust as part of a larger effort to denigrate the man is repugnant.

The Holocaust was a horrific time, and many people had to make excruciating choices to ensure their survival. George Soros has been forthright about his childhood experiences and his family’s history, and there the matter should rest.

Media Matters ought to ease up for a minute and allow Andrew Breitbart to correct this mistake, as it appears he has tried to do, but Breitbart has compounded the error by smearing George Soros, so it looks like he now owes two apologies.

Update: The offending cartoon has now been removed from all four Big Journalism posts.