Memo to George Will, Bill Kristol, and All GOP ‘Never-Trumpers’: Good Riddance! 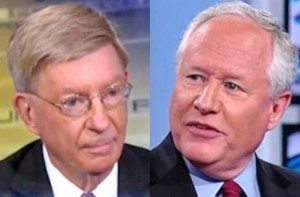 While many continue to greet Donald Trump’s hostile takeover of the Republican party with hysteria, confused as to why anyone could support him, what I find even more puzzling is why any alleged conservative continues to breathe life into the senseless “Never Trump” movement.

As conservative editor Bill Kristol continues to waste time flipping through the phone book dialing up anyone who will answer to run against Trump, and as conservative columnist George Will eagerly attempts to generate headlines with his melodramatic announcement that he’s leaving the Republican party over Trump. I wonder if either of these allegedly intelligent thinkers, or if any of the supposedly principled “Never-Trumpers,” actually understand what it means to truly be a conservative. Let me politely enlighten Mr. Kristol and Mr. Will about one of the basic foundations of the political philosophy for which they both claim to pledge loyalty: free markets.

Conservatives believe that individuals should be empowered and given the freedom to make their own choices, and guess what, the people have spoken. And in this case, the Republican primary voters have chosen Trump as the Republican party’s nominee. It’s such a simple and obvious point that it seems insane it even needs to be defended, but Trump competed fairly in the free market of ideas and won. Be angry at Trump the individual all you want, but any attempts to deny the movement behind him their chosen nominee or efforts to sabotage the party’s chances in the general election are entirely anti-conservative in their implied need for individuals to be saved from their own foolish decisions.

Since the will of the people is not enough to convince these Sore-Losers… ahem, I mean, Never-Trumpers, to silence their futile protests, then let me offer some more conservative reasons that should. The most apparent, repeated, and true reason is that conservatives who refuse to unify behind the Republican party’s standard-bearer will in effect strengthen Hillary Clinton’s prospects of moving into the White House. And although Kristol and Will unjustifiably seem to think sacrificing the Presidency for just four more years and extending the Obama legacy is no big deal, what is undisputed is that with Hillary as Commander-in-Chief, the Supreme Court would be guaranteed to be lost to the progressive movement for a generation. Despite how unpalatable Trump might be, no serious conservative would prioritize their own ideals for what they believe the Republican party should be, ahead of the realistic result of what the country will be under the direction of a liberal President.

Furthermore, the search for the “ideal” Republican candidate is a quaint idea, but idealism is not a philosophy often associated with the more pragmatic principles of conservatism. And given that both Mitt Romney and John McCain, the most recent Republican candidates for President, weren’t accused by anyone of being an ideal candidate, let alone a truly conservative one (see: RomneyCare or McCain-Feingold, just to start with the anti-conservative issues that bear each candidate’s name), it seems unwarranted that Trump, and his set of beliefs antithetical to conservative orthodoxy, are a bridge too far for Never-Trumpers to cross. Especially when there were so many “Anyone-But-Romney” and “Anyone-But-McCain” Republicans who eventually swallowed their complaints and begrudgingly supported both when each became the nominee.

If for some reason, though, Kristol and Will believe Trump poses such a unique threat to America and to the Republican party’s legacy, then one final and admittedly simple point should have put them at ease long ago. Trump is not running for dictator, but instead for President of a country with a strong system of separation of powers and checks and balances in place. The Republican party that Will foolishly and haphazardly abandoned will, at all times, be in Congress to reign in any of Trump’s outlandish proposals.

Therefore, all “Never-Trumpers” should take a deep breath and realize that whether Trump wins or loses in November, there will be no long-term damage done to the Republican party that cannot be undone by a future charismatic candidate. Voters are more intelligent than Will and Kristol assume and can distinguish Trump from being a typical Republican. In fact, the only permanent damage I see is to that of the reputation of Will, Kristol, or any “typical” Republican threatening to protect the purity of “their” Republican party by withholding their support of Trump. And since their narcissistic view has blinded them to the fact that the party belongs not to them and their ideals, but instead to the voters and the voters’ priorities, I have two words for them upon their graceless exit from support of the GOP nominee: “Good Riddance!”