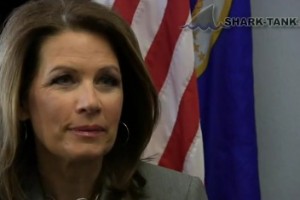 In an interview with Florida conservative political website Shark Tank, former GOP Presidential hopeful Rep. Michele Bachmann deployed an unfortunate (and confusing) metaphor, saying of President Obama’s recent remarks on oil speculation that “This is just about waiving a tar baby in the air and saying that something else is a problem.”

Aside from the offensive racial connotations, Bachmann doesn’t even seem to understand the “tar baby” metaphor.

There have been many politicians who have touched this metaphor and regretted it, including current presumptive GOP nominee Mitt Romney (and, yes, Democrats like Sen. John Kerry), and while the inherent racism of the term is the subject of some debate, enough people have expressed displeasure over its use to warrant retiring it.  John McWhorter argues that to the extent the term is a slur, it is an obscure one, but that claim holds less and less water after each well-publicized incidence of it.

The first time I heard the term was when I went to see Song of the South in its last-ever theatrical run, and I was too young to understand any of the not-so-subtle subtext. The next time I heard it was as an adolescent, after I moved to a white, working-class suburb. In those days, the racism was both casual (when there were no black people around) and creative. A white acquaintance once whispered in my ear, of a black kid whom I knew, but he didn’t, “How now, brown cow?”

So, “tar baby” was one of hundreds of racial slurs that I was exposed to growing up, and I never heard the term used as a metaphor until Bush White House Press Secretary the late Tony Snow used it in a briefing in 2006. Since then, it has caused several other media flaps, and while I don’t doubt that most of these were unintentional, aren’t there plenty of better metaphors that express the same thing? Depending on the situation, you could use Pandora’s Box, or quicksand, or a spider web. Hell, if you need a new metaphor for a sticky problem, how about “blue dress?”

What’s funny about Bachmann’s usage is that she seems to want to express the opposite of a tar baby. “This is just about waiving a tar baby in the air and saying that something else is a problem,” she said, adding “I have never seen a more irresponsible President who is infantile in the way that he continually blames everyone else for his failure to first diagnose the problem and second to address the problem.”

If the President is deflecting, shouldn’t it have been a Teflon™ Baby, or a Baby Starship With Shields Deployed? And why would you wave a tar baby in the air? It doesn’t make any sense.

It’s hard to tell what was going through her mind, but she prefaced her “tar baby” remark by saying that the President has proven his lack of knowledge about the economy “in spades.” Maybe there’s something subliminal going on here.

Ironically, Bachmann went on to make one of the few decent points I’ve heard from her, which is that, if oil speculators are such a big problem, why are we only dealing with this now? The President rightly blames Congress now, but this same problem was plaguing President Bush while Obama was running for president, right before he enjoyed a (brief) bulletproof majority in both Houses.

Here’s the clip, via Shark-Tank.net: