Miley Cyrus Under Fire for Desecrating Mexican Flag… with Her Butt 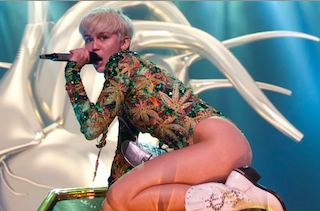 Mexican authorities are investigating Miley Cyrus after the always-controversial singer performed in front of thousands in Monterrey, Mexico Tuesday night and at one point during the show had dancers pretend to whip her comically-large prosthetic butt with tiny Mexican flags.

According to a report from Fusion’s Mexico City correspondent Manuel Rueda, the incident has been “widely covered” by local press and may have actually violated a law that protects “national emblems, the flag and the national anthem.”

The 35-page law protecting national symbols regulates the proper use of Mexico’s flag in schools, public buildings, and during government ceremonies, but does not exactly include any clause specific to butt-flogging.

Article 52 does, however, say that acts which show “disrespect for the flag and national symbols, will be punished according to their seriousness and the condition of the person who commits them.”

According to the law, disrespecting the flag can be punishable with fines up to 250 minimum wages, or 36 hours in jail. And if the infraction is committed for commercial purposes, the crime can be punished with a fine of up to 1,000 minimum [daily] wages — or roughly $5,200.

Previously, Rueda reports, Mexican pop star Paulina Rubio was “fined $4,000 for appearing in a Spanish magazine with a Mexican flag draped around her naked body.”

At least one Mexican lawmaker has spoken out against Cyrus’ act.

“They are hitting her with the flag, or cleaning her backside. It’s a lack of respect,” Francisco Trevino Cabello, of the conservative National Action Party, said of the incident. “The interior ministry must sanction the singer Miley Cyrus for desecrating the flag.”

Watch video below, via YouTube (the moment in question occurs at 2:20):