Million Vet March Organizers: We Were ‘Hijacked for Political Gain’

Million Vet March Organizers: We Were ‘Hijacked for Political Gain’ 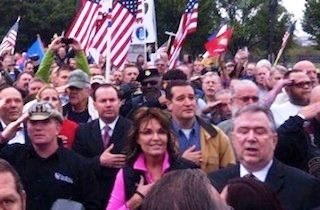 A march protesting the closures of war memorials in Washington, D.C. on Sunday featured marquee conservative figures like Ted Cruz (R-TX) and Sarah Palin and ignited controversy over everything from the presence of a Confederate flag to calls for President Barack Obama’s impeachment.

Now the organizers of the march are decrying the usurpation what was supposed to be a “peaceful and apolitical” demonstration for political gain. 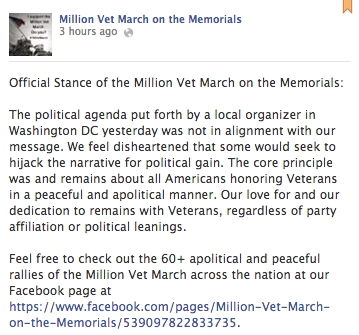 Official Stance of the Million Vet March on the Memorials:

The political agenda put forth by a local organizer in Washington DC yesterday was not in alignment with our message. We feel disheartened that some would seek to hijack the narrative for political gain. The core principle was and remains about all Americans honoring Veterans in a peaceful and apolitical manner. Our love for and our dedication to remains with Veterans, regardless of party affiliation or political leanings.

The march, which started with protestors removing barriers from the World War II Memorial and ended with a conflagration before the White House, quickly became the center of controversy. One man waved a Confederate flag; Freedom Watch’ Larry Klayman told Obama to “put the Quran down” and leave town; the crowd invoked “brown shirts” and Kenya when police arrived.

Cruz and Palin also spoke at the rally, aiming criticism at the Obama administration for the closure of the memorials, which followed the government shutdown two weeks ago.

The organizers’ message seems to suggest that the presence of conservative speakers was the decision of a local organizer, not of the group itself, which billed itself as apolitical.