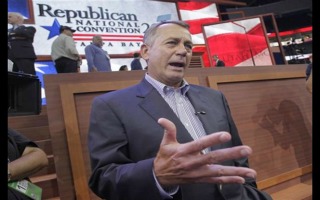 On Monday, The Atlantic Wire’s Elspeth Reeve published a dramatically misleading piece that spun a response by House Majority Leader Rep. John Boehner (R-OH) to a question about the economy into the unwitting exposure of his outright racism. The headline of Reeve’s post reads “Boehner Says Out Loud He Hopes Blacks and Latinos ‘Won’t Show Up’ This Election,” and the body of the piece backs up this assertion. But the quote in question reveals no such sentiment by Boehner.

Boehner’s offending quote was made when he took questions during a Christian Science Monitor luncheon in Tampa on Monday. Boehner was asked about several demographic groups – notably, women, African Americans and Latinos — that polls have suggested are going to turn out to vote against his party in November unless the dynamics of the presidential race change.

Boehner replied that the state of the economy is likely to keep many of those voters from casting their ballots for President Barack Obama. He said that those voters were just as likely to stay home on Election Day as they were to vote against the GOP:

I read that sentence several times to determine whether or not my jaded antipathy towards the oft-played race card had blinded me to the obvious animus contained within. I did not see it. Nowhere in Boehner’s statement is there a hint of “hope.”

Even in Talking Points Memo’s write up by Benjy Sarlin, whose piece Reeve quotes, published Boehner’s comments under the headline “Boehner: The Economy Still Trumps All — No Matter What.”

Reeve attempts to back up the misleading headline with spurious and otherwise unrelated references to voter identification laws in Pennsylvania and Ohio’s restrictions on early voting that are purportedly discriminatory towards African American voters.

“I guess I really actually feel we shouldn’t contort the voting process to accommodate the urban — read African-American — voter-turnout machine… Let’s be fair and reasonable.”

Prior to reading Reeve’s illuminating article, I would have considered the words “fair” and “reasonable” to be rather non-discriminatory. How hopelessly naïve of me.

Defaming the somewhat anonymous local GOP official is one thing, but the attacking the U.S. House Speaker for exposing his latent racism in your own fevered estimation should be considered quite another.

Reeve’s post presents a perfectly misleading picture of events which appear to have been willfully misinterpreted by the author. At no point does the author appear to consider that there may be an incredulous audience reading this post. It seemingly never occurred to Reeve some credible evidence beyond the author’s own powers of psychoanalysis might be required to argue that Boehner had revealed the Republican party’s secretly racist agenda.

Such conduct should not be tolerated by The Atlantic Wire.

Given the misleading headline and the impression that it leaves the reader, one could be forgiven for seeing more “hope” on Reeves part — and for a rather base goal. Sadly, it is the hope for evidence of racial animus on the part of the Speaker of the House. Few actions scream misconduct as blatantly as this mischaracterization of Rep. Boehner’s comments.