PA Republican Thinks His Daughter’s Out Of Wedlock Pregnancy Is Totally Comparable To, Y’know, Getting Raped 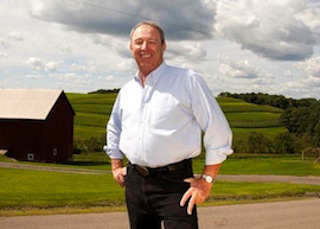 Guys, this post might have to be short. You see, the “R,” “A,” “P,” and “E” keys on my office computer are broken from having to type the above sentence so many darn times! Seriously, Republicans need to stop saying insanely dumb things on this subject. How am I supposed to Google where the nation’s best grape picking spots are? That’s my secret hobby and I can only type the “G” now! “G picking” means something entirely different!

Anyway, so who said something dumb this time? Turns out it was Tom Smith, the excitingly-named Senatorial candidate from Pennsylvania. Smith was at a Pennsylvania Press Club luncheon when he was asked about his prospective colleague, Rep. Todd Akin.

Unlike other Republicans who threw Akin under the proverbial bus, Smith bravely defended him in the best way possible; by saying something just as bad to distract the reporters with. At least, I think that’s what the plan was.

“’What that congressman said I do not agree with at all,’ Smith said. ‘He should have never said anything like that.

‘I lived something similar to that with my own family,’ he went on to say. ‘She chose life and I commend her for that. She knew my views but fortunately for me … she chose the way I thought. Now don’t get me wrong. It wasn’t rape.’

Smith was then asked if his daughter’s unwed pregnancy and rape were similar. ‘No, no, no. Put yourself in a father’s position, yes, I mean it is similar,’ he said.

Asked again to clarify his statement, Smith said he wasn’t comparing the two.

‘No, I didn’t not say that,’ Smith said. ‘I said I went through a situation (with a daughter). It’s very, very difficult. But do I condone rape? Absolutely not. But do I propose life, yes I do. I’m pro-life, period.'”

Ooh ooh! Do you know what would be the worst thing ever? Being the father of this guy’s grandchild. Can you imagine that?

“Right, right. I get those things so confused. You know, because I’m in a father’s position.”

Anyway, as Gawker’s Max Read points out, Smith isn’t exactly doing too well in the polls right now anyway, so this probably won’t affect the election. It will just be another bad GOP rape comment to throw atop the pile.

Hey, if a Republican trivializes rape and it doesn’t affect an election, does it make a sound? Interesting question.

You ponder that. I can’t use this keyboard anymore. I’m gonna go borrow someone else’s so I can get back to planning my trip to the vineyard. Picking season has just begun, y’know!