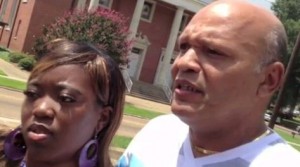 A Baptist church in Mississippi with an overwhelmingly white congregation closed its doors to a black couple who wanted to get married in the church. Charles and Te’Andrea Wilson just recently joined the church and were preparing to get married at the First Baptist Church of Crystal Springs, when their pastor, Reverend Stan Weatherford, relayed to them that several members of the congregation came to him to complain about a black couple getting married in the church.

According to the Clarion Ledger, the couple did not get much notice before the day of the ceremony, having only gotten the news two days in advance. The pastor explained his decision to a local TV channel.

Insiders say five or six members went to the Rev. Stan Weatherford after seeing the couple’s wedding rehearsal the Thursday night before their Saturday wedding.

The church pastor said he was surprised by the reaction of some church members.

The ceremony was moved to another church nearby, and Weatherford was on hand to officiate. Charles Wilson said that he still thinks highly of the pastor, but expressed disappointment that he didn’t stand up against the racist sentiments of his parishioners.

Watch Wilson speak out in the video below, courtesy of the Clarion Ledger: