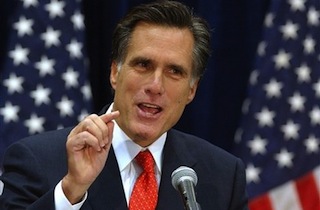 Mitt Romney’s whirlwind “Look Presidential” foreign policy tour hit another snafu today. The candidate, who had previously succeeded in getting the mayor of London to mock him in front of thousands of cheering fans as well as receiving hate from nearly every news outlet in England, moved on to angering another part of the world. His current stop is Jerusalem where he’s attempting his pro-Israel cred. Romney managed to do that in the most traditional way possible; pissing off Palestinians.

Romney was speaking to a group of big Israeli donors at the King David Hotel when he attempted to discuss the difference between Israel and Palestine. From the New York Times:

“’Culture makes all the difference,’ Mr. Romney said. ‘And as I come here and I look out over this city and consider the accomplishments of the people of this nation, I recognize the power of at least culture and a few other things.’

While the New York Times points out that Romney’s figures weren’t actually even accurate (the Palestinian G.D.P. is more like $2,900 which is…close to $10,000, I guess?), that’s not the biggest issue here. One of Palestinian President Mahmoud Abbas‘ senior aides, Saeb Erekat, had some rather harsh words for the Republican candidate.

“’It is a racist statement and this man doesn’t realize that the Palestinian economy cannot reach its potential because there is an Israeli occupation,’ Saeb Erekat, a senior aide to Palestinian President Mahmoud Abbas, told the Associated Press.

‘It seems to me this man (Romney) lacks information, knowledge, vision and understanding of this region and its people,’ Erekat said. ‘He also lacks knowledge about the Israelis themselves. I have not heard any Israeli official speak about cultural superiority.’”

Fortunately for Romney, this will probably hurt much less than the big England debacle. After all, he was there to cozy up to Israeli’s, and as far as much of the conservative base is concerned, he did just that. No “unique relationship” here. Expect the coverage of this story in…certain areas…to be less about a presidential candidate showing a complete lack of necessary tact, and more about an American pissing off people we didn’t really like anyway.