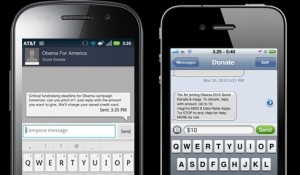 With so much time and space to fill in the 24-hour news cycle, even typos and glitches have found a place in the sun this campaign season. This week, however, the Romney campaign was caught violating good old Amercian values when they copied, word-for-word, the text from the Obama campaign’s donation page. Buzzfeed‘s Zeke Miller compares the text from the two sites:

Obama: “After you’ve saved your credit card and phone number in your BarackObama.com account, you can use your cell phone to make a donation. All you need to do is text the amount you want to give. If you text us “10”, we’ll charge your saved credit card $10. It’s never been easier to donate.”

Romney: “After you’ve saved your credit card and phone number in your MyMitt account, you can use your cell phone to make a donation. All you need to do is text the amount you want to give. If you text us “10”, we’ll charge your saved credit card $10. It’s never been easier to donate.”

They would have gotten away with it, too, if it hadn’t been for those meddling rules of grammar. As Salon‘s Alex Seitz-Wald points out, the smoking gun here is that the Romney page, which went up five months after Obama For America’s, even copied the out-of-place comma from the OFA page. Ruh-roh. Seitz-Wald also notes that this isn’t the first time Team Romney has tried to bite Obama For America’s style, and it probably won’t be the last:

Democratic digital consultant Matt Ortega, who first pointed out the similarity on Twitter (BuzzFeed also reported it), said, “The sheer hubris and arrogance of Romney’s digital team is truly something to behold. They’ll prematurely self-promote as better than OFA to tech blogs all the while running an embarrassingly inept rip off of the Obama ’08 strategy.”

He pointed out that Romney’s digital director mocked the Obama campaign’s digital team to Mashable just last week. “I think our online ad team is superior to theirs … It’s where we pride ourselves as a campaign to be cutting edge,” Zac Moffatt said.

There are other examples of visual similarities, such as this Obama and Biden banner and this Paul Ryan banner.

Eventually, the Romney campaign tweaked their site so it didn’t match quite so exactly, and their digital director, Zac Moffat, told Buzzfeed that “This was a junior staff confusion that has been updated and resolved.”

Junior staff confusion? About what, the difference between right and wrong? It’s not exactly Stephen Glass, and any bleary-eyed intern could be forgiven for copying and pasting some internet donation page boilerplate, but when you’re busted, why not just say “Okay, you got me?”

As we learned again recently, that’s just not the Romney campaign way.