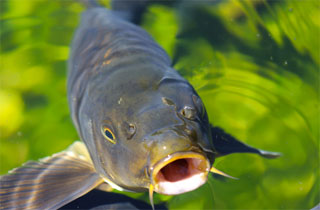 Here’s a goofy story we regret missing earlier this year: The Great Lakes are under attack from an invasive species, fish of the Cyprinidae family, which threaten to overwhelm the fragile ecosystem of the world’s largest freshwater lakes. However, they’re commonly known as “Asian carp” and, as such, the biggest concern is that the name is offensive.

Back in April, Minnesota’s State Senate approved a bill amendment that would rename the “Asian carp” — i.e. the black, bighead, grass, and silver carp species — something that would absolutely not offend Asians, due to the carp’s association with a growing pestilence. CBS reported that the bill was created “in response to concern by some people that the current term casts people from Asian cultures in a negative light.”

The bill that included the reworked name passed the legislature and was signed by the governor in late May. The evil fish shall henceforth be known, at least in the legislature, as “invasive carp.”

First, yes, this is definitely offensive — not in the “How DARE you demean my racial group with your hurtful stereotypes” way, but in the “Wait, seriously?” way. According to National Journal, there are plenty of invasive species that are named after locations, simply because that is where they come from. Asian carp, for instance, were imported into the US during the 1970’s from a variety of Asian countries — meaning it’s completely acceptable to throw all the fish under the umbrella heading of “Asian.” Because, again, that is where they are from.

Also, save your talk about ecological cultural imperialism or whatever — there are lots of invasive species named after places white people come from:

And these names even go beyond continents. The Burmese python threatens wildlife in South Florida. The Chinese mitten crab competes with native species in the Chesapeake Bay in Maryland and the Hudson River in New York. There’s also the Russian knapweed, Spanish cane, Japanese barberry, Australian pine, Canada thistle, Brazilian waterweed, New Zealand mud snail, Cuban tree frog, and Armenia blackberry, among other invasive species in the U.S. Do the names of these plants and animals also reflect poorly on the countries from which they came?

In a wonderfully ironic coda to the entire story, the author of said amendment is, by all indications, a white dude.