Rand Paul Is Right About Iraq, and Wrong About Reagan 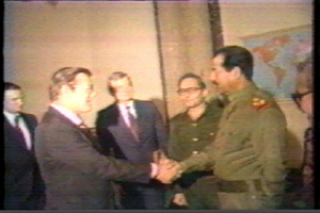 In his Wall Street Journal op-ed last week, Senator Rand Paul (R-KY) expressed opposition to sending U.S. troops back into Iraq or picking sides in its escalating civil war. Paul blamed both the George W. Bush administration for invading Iraq in 2003, as well as the Obama administration for foreign policy blunders he believes have exacerbated the situation: “For former Bush officials to blame President Obama or for Democrats to blame President Bush only serves as a reminder that both sides continue to get foreign policy wrong.”

He outlined a foreign policy of restraint and realism, appealing to the legacy of the Gipper to make his case: “Though many claim the mantle of Ronald Reagan on foreign policy, too few look at how he really conducted it. … We need a new approach, one that emulates Reagan’s policies, puts America first, seeks peace, faces war reluctantly, and when necessary acts fully and decisively.”

Sen. Paul is surely right about the foolishness of further entanglements in a conflict we only just managed to extricate ourselves from, but we have to assume his call for a “Reagan foreign policy” in Iraq is some kind of bad joke.

Which part of the Reagan administration’s foreign policy would Rand like to see us emulate? Giving chemical weapons technology, battlefield intelligence, and material aid to Saddam Hussein’s Iraq, or selling thousands of anti-tank and anti-aircraft missiles to the Islamic Republic of Iran? All of this while they were at war with each other, and civilians were being targeted?

Let’s take a brief look at “how Reagan really conducted foreign policy.” The case of Iraq is particularly instructive: In late 1980, Hussein invaded Iran, out of fear the Iranian Revolution would spark a revolt among Iraq’s repressed Shiite majority. But by 1982, Iraq was losing, driven back by Iran’s suicidal human-wave attacks, so the Reagan State Department removed Iraq from its list of state sponsors of terror, allowing it to purchase dual-use technology, such as the agents that cause anthrax and botulism, which could be used for civilian purposes or (as they were) to develop chemical and biological weapons. Between 1985 and 1990, the Reagan and Bush administrations would authorize 771 sales of dual-use technology to the dictatorship, despite Iraq’s illegal use of nerve gas against Iran and Kurdish civilians.

In December 1983, despite the fact the U.S. already knew Hussein was using illegal WMDs, special envoy Donald Rumsfeld went to Baghdad to negotiate further US support for Iraq; by November 1984, Reagan resumed diplomatic relations with Hussein. Eventually, 60 Defense Intelligence Agency officers were tasked with providing “detailed information on Iranian deployments, tactical planning for battles, plans for airstrikes and bomb-damage assessments for Iraq,” including helping plan attacks that involved the use of chemical weapons. “[Although] the Iraqis never told us that they intended to use nerve gas,” retired Air Force Col. Rick Francona told Foreign Policy, “they didn’t have to. We already knew.”

-RELATED: Memo to Cable News: Learn the Difference Between ‘Isolationism’ and ‘Non-Interventionism’

At the same time, in 1985, Iran secretly requested to purchase arms from the United States, despite the official arms embargo imposed on the regime. In exchange for cooperation in freeing American hostages held by Hezbollah in Lebanon (the scene of another disastrous Reagan blunder), the administration agreed to supply the Iranians with anti-tank and anti-aircraft munitions. In eight sales from 1985-1986, Reagan officials traded thousands of missiles for the release of three hostages (who were quickly replaced in new kidnappings). The administration used the profits on the sales to fund the right-wing Contras in Nicaragua, circumventing a congressional ban on funding the guerillas, until the scheme was exposed, nearly leading to Reagan’s impeachment.

The Iran-Contra affair and aiding Saddam Hussein remain some of the most ludicrous and criminal foreign policy moves in recent history. The Reagan administration’s decisions directly contributed to prolonging the Iran-Iraq conflict, the 20th century’s longest conventional war, and the deaths of countless thousands of soldiers and civilians.

With respect to Senator Paul: Coherence, realism, and restraint are not legacies of Reagan’s foreign policy — they are lessons hammered home by its failures.

— —
>> Daniel Bier is the publisher and executive editor of The Skeptical Libertarian. Follow him on Twitter here.