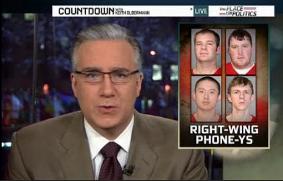 Now that we know the whole James O’Keefe arrest was really just a “misunderstanding,” we probably won’t be hearing as much about it.

Except of course on MSNBC, which spent significantly more time covering the story last week than any other news outlet, on TV print or the web.

The O’Keefe arrest happened one week ago today, and immediately became part of the news cycle on cable news and elsewhere. But as details emerged, and other events like the State of the Union became the main topic of conversation, the story fell to the background.

But on MSNBC, that wasn’t the case, according to the Pew study out today about last week’s news coverage:

The O’Keefe arrest was the No. 9 subject in the media overall last week, at 2% of the newshole. But on MSNBC, with a liberal prime time talk lineup, the story accounted for 12% of the coverage studied last week. Conversely, the O’Keefe story accounted for only 1% of the airtime examined on Fox, with its conservative evening lineup. CNN’s coverage level, 2%, was much closer to Fox than MSNBC.

This was likely because of a Keith Olbermann and Rachel Maddow, who spent large portions on Tuesday and Thursday covering the story, and David Shuster, who went down to New Orleans to cover the story on the ground (and had a well-publicized interview shouting match with Andrew Breitbart).

This goes beyond cable news though. The PEJ survey looks at 52 different outlets, from print to the web to TV and radio. And although O’Keefe and his cohorts showed up on the front page of the New York Times last weekend, the paper didn’t cover the story very much at all last week as a whole.

What will happen this week? The story has been discussed several times on MSNBC already, according to TV Eyes.