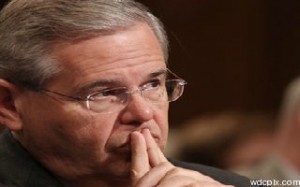 The Daily Caller reported Thursday that two prostitutes from the Dominican Republic have alleged that Sen. Bob Menendez (D-NJ) paid them for sex this year. The two women claim that Menendez agreed to pay them $500 for sex acts while the senator was visiting the Caribbean island this year – however, they allege that Menendez only paid them $100 each.

Speaking through a translator to The Daily Caller, both prostitutes claim they did not know that Menendez was a United States Senator when he contracted them for sex. The story claims that Menendez engaged in the solicitation of prostitutes while visiting a resort owned by a campaign donor.

It is known that Sen. Menendez has been a regular visitor to the Dominican Republic. On at least one occasion, according to a news account, Menendez has been a guest at the Casa de Campo home of a friend and campaign donor named Salomon Melgen, an ophthalmologist and owner of an eye clinic in Florida.

Melgen has donated $14,700 to Menendez’s campaigns since 1993, with the bulk of it coming since he became a U.S. Senator, according to Federal Election Commission data collected by the Center for Responsive Politics.

Menendez’s office has declined to comment on the story, saying that they refuse to acknowledge a story that they say is patently false.

Menendez was first elected to the Senate in 2006 and faces his first reelection campaign in New Jersey against Republican state Sen. Joe Kyrillos.

Watch the interview below via The Daily Caller:

Read the full report via The Daily Caller