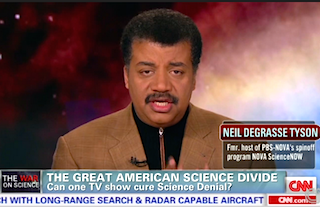 Earlier this month, CNN faced some criticism for pitting Bill Nye “the Science Guy” against a climate change skeptic on Crossfire for a debate that was equally balanced despite the fact that more than 97% of scientists are on Nye’s side. A few days later, HBO’s John Oliver remedied the situation by having 96 scientists join Nye in a debate against three anti-climate change folks.

Another member of the scientific community who’s not happy with the media’s tendency to give equal times to both sides is Cosmos host Neil deGrasse Tyson. On the latest episode of his StarTalk Radio Show, Tyson spoke to former CNN science reporter Miles O’Brien, who shared his frustrations with the standard operating procedure of that network and others.

Tyson and O’Brien began by discussing how journalism could be more like science, complete with a “peer review” process to help prevent errors. “Accuracy in journalism, that leads to the phrase, ‘Is it fair and balanced’?” Tyson remarked.

In a story where more than 95 percent of scientists agree, O’Brien asked, “Is it fair in a story about climate change, which I’m obviously what I’m talking about, to do this classic journalistic convention of equal time for both sides? This is a huge mistake, I think, for journalists.”

Tyson agreed that it did not make much sense for networks to get “a person from that five percent, but now he gets 50 percent of your time.”

“Is that serving the truth?” O’Brien asked. “I submit to you not. As a matter of fact, that is feeding obfuscation, that is actually perpetuating a myth, dare I say, a lie.”

Later, Tyson summed up O’Brien’s point, saying, “This concept of fair and balanced implies that everything is a 50/50, or even that there are always two sides to a story, when, really, there could be five or six. So it’s an odd ethos that they’ve put themselves in.”

“I think it’s because journalists, historically, would report on politics, where you always have warring factions, and so you’ve got to give everybody time,” the pop scientist added. In a show like Crossfire, which is designed for left vs. right political battles, it becomes utterly impossible to capture that level of nuance, he seemed to suggest.

Listen to audio below, via StarTalk Radio: