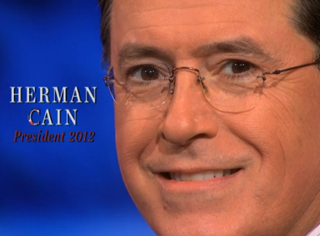 Stephen Colbert wasn’t able to get his name on the ballot in South Carolina despite polling at around 5% (better than Jon Huntsman!) down there, mostly because he didn’t even try. This is a problem for the SuperPAC that has definitely nothing to do with him, but they found a solution: find another name on the ballot no one is actually campaigning under, and squish Colbert in there. To that end, here is an (Non-)ColbertPAC ad endorsing “Herman Cain.”

The ad notes that “the people of South Carolina are frustrated,” but advises that there is, indeed, one name on the ballot that they can believe in: Herman Cain (at this moment, Stephen Colbert appears). To reassure the public, it notes that “he’s such a Washington outsider, he’s not even running for president!” There are also some elderly dancing cheerleaders and other bits of surrealist Americana.

The video via Americans for a Better Tomorrow, Tomorrow (and the press release accompanying the ad below):

“Tragic new reports show that South Carolinians can sometimes go for several minutes at a stretch without seeing a single political ad,” said Jon Stewart, President For Life For Now of The Definitely Not Coordinating with Stephen Colbert Super PAC.” Even more tragically, we discovered that one visionary leader wasn’t having his voice heard: Stephen Colbert. Now I can proudly say: He’s still not having his voice heard, because we do not coordinate with any candidate or campaign.”

The spot begins running today as a massive, multi-dozen-dollar ad buy in South Carolina. Snooty types who love to mention how they never watch television can view the ad here.