New Mexico GOP Gov Responds to Trump’s Attacks: She ‘Won’t Be Bullied Into Supporting’ Him

New Mexico GOP Gov Responds to Trump’s Attacks: She ‘Won’t Be Bullied Into Supporting’ Him 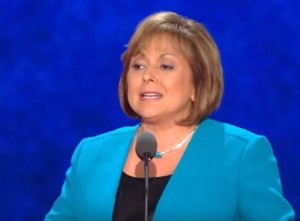 Donald Trump was in New Mexico last night and, during his speech, went on a rant against the state’s Republican governor, Susana Martinez. He repeatedly declared that she’s “not doing her job” and said, “We’ve got to get her moving. Come on. Let’s go, governor.”

Now, it’s possible that Trump targeted her because 1) she has yet to endorse him, and 2) she was one of the first Republicans to condemn his now-infamous remarks about Mexican immigrant criminals and rapists.

Apparently, Donald Trump doesn’t realize Governor Martinez wasn’t elected in 2000, that she has fought for welfare reform, and has strongly opposed the President’s Syrian refugee plan. But the pot shots weren’t about policy, they were about politics. And the Governor will not be bullied into supporting a candidate until she is convinced that candidate will fight for New Mexicans. Governor Martinez doesn’t care about what Donald Trump says about her — she cares about what he says he will do to help New Mexicans. She didn’t hear anything about that today.

And in a slightly related tidbit, Lou Dobbs (arguably the most pro-Trump Fox Newser) tweeted this out earlier seemingly blaming Martinez for the violent protests at a Trump rally last night: