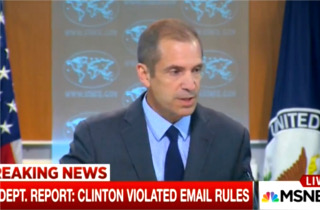 State Department spokesperson Mark Toner was by turns taciturn and defensive in an awkward press briefing Wednesday afternoon, as he addressed the leaked audit report on former Secretary of State Hillary Clinton‘s use of a private email server.

The audit report by the State Department Inspector General had been leaked to members of the media one day before it was due for public release — a state of affairs that left Toner “at a bit of a disadvantage” and “somewhat limited” in his responses, he said.

One reporter called the department’s earlier conference call briefing reporters on background an attempt to run “anonymous spin,” since apparently Toner was unwilling to discuss things he had gone over during that call. “I take objection to your allegation that it was some kind of spin effort,” Toner told the reporter.

At another point, Toner nodded rather than give a “yes or no” answer. “People can’t see your nod,” the reporter said.

“While not necessarily encouraged, there was no prohibition on using personal email. The only requirement is that — and regulations do state this — is that records need to be preserved, and I would say, looking back with 20/20 hindsight, we do now have […] policies that would make it hard to approve this kind of outside system to replace your official email,” Toner said haltingly.

Another reporter referred to the background briefing as having occurred under a “cloak of anonymity,” shrouding some salient points about the report.

“There’s not any effort to spin this. There’s not any effort to hide or obfuscate what the information is,” Toner said. “One of the reasons we did this on background is acknowledging the fact that other people who were privy to this report before it was publicly released chose to leak it to members of the media.” He added: “None of us are clean on this, so to speak.”

Toner added that given that since some members of the media had seen the report, but not others, “we had no choice” but to hold the background phone briefing in order to provide context. “It is always our preference that this stuff is released publicly and we can address it publicly,” he said.