It might not be a surprise to anyone that the New York Daily News makes frequent use of provocative headlines and covers, while also trashing the NRA when gun violence occurs in America. Today, the paper struck a nerve with online commenters and pro-gun people again with a cover that labels NRA executive Wayne LaPierre as much of a terrorist as the San Bernardino assailants: 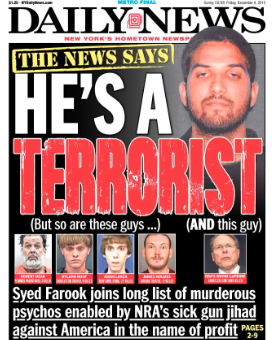 The cover describes Syed Farook, the gunman who killed 14 people alongside his wife two days ago, as a terrorist following the revelations of his apparent Islamic radicalization and production of homemade bombs. The cover lumps him in with the perpetrators of the violence in Colorado Springs, Sandy Hook, Charleston, and Aurora, but also adds LaPierre to the mix, saying he is equally culpable for “the NRA’s sick gun jihad against America in the name of profit.”

While the NRA has yet to respond to the cover, the Huffington Post noted how they have made their position clear with a rebuke to President Obama‘s address yesterday on gun control:

The #NRA won’t accept the blame for murderers, nor apologize for fighting for our right to defend against them https://t.co/DN0mEex4ay

As for how people reacted to the cover online, there were some mixed feelings to say the least:

@NYDailyNews So brain-dead paper concludes thousands of years in conflict with Islam and Christian/Western world is about the NRA; genius.

@NYDailyNews wayne lapierre in the cover, AS A TERRORIST! This is bloody awesome!

.@NYDailyNews is not pulling any punches.

Brilliant front page by @NYDailyNews, one of very few U.S. media outlets to go after the @NRA. pic.twitter.com/6lCmnfYHwQ