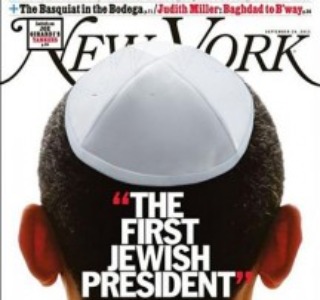 In New York magazine this week, John Heilemann contends that President Obama is the “best thing Israel has going for it right now” and despite some setbacks he remains a president “every bit as pro-Israel as the country’s own prime minister — and, if you look from the proper angle, maybe even more so.”

The cover story‘s attention-grabbing, Toni Morrison-esque characterization of Obama as “The First Jewish President” comes from a quote by Abner Mikva, a White House counsel, who during the run-up to the last presidential election said, “When this all is over, people are going to say that Barack Obama is the first Jewish president.” While Heilemann thinks that prediction “has so far proved to be wildly over-optimistic,” he believes there is “more truth in it than meets the eye.”

In the piece, Heilemann chronicles Obama’s various struggles in his policy making over Israeli-centric issues. Despite Obama being “well attuned to the Jewish community and its views”, his wrangling with Israeli Prime Minister Benjamin Netanyahu over his support of Israel’s 1967 borders “with mutually agreed [land] swaps” and Ed Koch‘s high profile criticism has left some Jewish voters under the impression that he wasn’t fully on their side.

Heilemann strongly disputes this by saying “Obamans have never wavered in going balls-out for Israel”. He points out that the president’s swift action in rescuing Israelis trapped in the Cairo embassy when it was under siege was a quintessential event in Obama’s support of Israel. “The president not only picked up the phone but leaned hard on the Egyptians to free those within.” Heilemann quotes Netanyahu saying the president’s help was “a decisive moment.”