Newsbusters Apologizes to Matthews and David Corn for Anti-Semitism Accusation 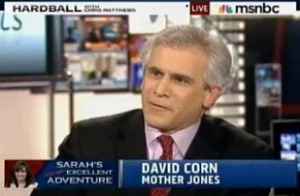 On Monday night, conservative media watchdog Newsbusters published a column denouncing Mother Jones’ David Corn for making what they called an “anti-Semitic remark,” and whacked Hardball host Chris Matthews for laughing at it. Corn responded with befuddlement at the charge, and by Tuesday evening, the original post had been deleted from Newsbusters. Much to his credit, the post has been replaced with an apology from its author, Noel Sheppard.

Noel Sheppard’s apology is not the weaselly “sorry if you got offended” kiss-off that’s so popular nowadays, but an honest-to-goodness admission that he got it wrong:

This post has been modified from its original version.

After discussing with my colleagues the subject of this article, which claimed Mother Jones’s David Corn and MSNBC’s Chris Matthews engaged in an anti-Semitic discussion on Monday’s “Hardball,” I have decided that I do not stand by my allegation.

I apologize to Corn and Matthews for my misinterpretation of this conversation.

In the realm of online political media, and especially media criticism, it is rare to see anything but a grudging correction, and more often, the reaction to being called out is a face-saving double down. However, it has been my experience that Newsbusters, their opinion and analysis notwithstanding, make an effort to be honest and transparent, so this doesn’t surprise me.

Hopefully, the many conservative sites that picked this story up will also promote Sheppard’s retraction and apology.

In case you missed it, here is the original clip, followed by Newsbusters’ transcript of the portion in question (at about the 2 min mark):

Here’s Newsbusters’ transcript of the exchange:

CHRIS MATTHEWS, HOST: This coalition between the Right and Israel, the evangelical right in the United States, is not founded on personal friendships or anything like that, or even values. It’s founded on some sort of weird, rightwing thing where you just high five each other there at the Western Wall and then that’s done, they’re trip.

DAVID CORN, MOTHER JONES: But there is a theological component which Gene was referring to…

CORN: …Which is there’s a certain brand of evangelical Christians who believe in Revelations, that Armageddon is coming, and that will happen in Israel basically.

MATTHEWS: If they hold the West Bank.

CORN: If they hold, well there’s a lot of different components to that, but that’s why they like Israel. That’s why they want Israel to be strong. It’s not because…

CORN: Right. It’s not because they like Jews or Israelis.