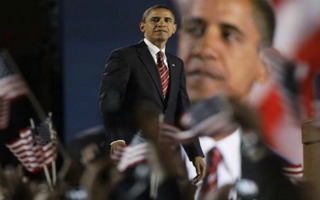 New York Daily News columnist Mike Lupica went a little overboard in his analysis of the political landscape in a column on Friday. Lupica could not even mask his spite and resentment for the American people when he determined that the nation, still simmering with latent racism, is ready to let their most ignoble instincts take over in the fall and unseat the President. Lupica calls Barack Obama’s race “the silent issue that could doom” his election chances and says being black makes Obama the underdog ahead of November.

Lupica suggests that it was not so much that Obama overcame the nation’s racism in the last presidential election cycle, but that the perfect storm of Democratic headwinds in 2008 (financial collapse, 8 years of Republican governance, an unpopular war, etc.) buoyed Obama enough to overcome the nation’s recalcitrant white racist vote:

Last time, there were just weren’t enough reasons for enough white voters to vote against the black guy, as much as they wanted to. This time there are plenty.

Lupica also warns his readers not to believe that this race is close in the polls – only because spiteful white racists don’t want you to know about their plan just yet:

If there is one great truth about polling in this country, at least when it comes to race, is that people lie through their teeth. Mostly because they don’t want to look like some lousy, scummy bigot — even talking to an anonymous voice on the telephone.

Beyond the fact that you can practically hear the angry spittle that was flying at the writer’s keyboard as he wrote this diatribe, as analysis it is entirely unfounded.

What Lupica attempts to identify is a phenomenon most commonly referred to as “The Bradley Effect.” It was used to explain why Los Angeles Mayor Tom Bradley, who was black and consistently led in the polls of California’s 1982 gubernatorial race against George Dukmejian, but ended up losing in the fall.

In 2008, there was a real fear that “The Bradley Effect” could explain why President Obama led Sen. John McCain consistently in the polls after the collapse of Lehman Brothers in September.

Thankfully, this convenient but unsupported theory has been debunked and debunked again. V. lance Tarrance, Jr. took the theory apart for Real Clear Politics just prior to the 2008 presidential election:

That Bradley won the vote on Election Day would hardly seem to suggest a hidden or last minute anti-black backlash–on the contrary, it suggests how easy it would have been for weekend polls and Election Day exit polls to get it wrong, since the decisive group of voters had largely already voted before the final weekend and never showed up at the polls to answer the questions of exit pollsters….

The Deukmejian campaign tracking polls did not confirm any Bradley Effect and to interject this type of speculation into the 2008 presidential election is not only folly, but insulting to the political maturity of our nation’s voters. To allow this theory to continue to persist anymore than 25 years is to damage our democracy, no matter who wins.

Lupica also laments that there will not be a broad public discussion about Obama’s race because it implicitly takes Mitt Romney’s Mormon religion off the table for Democrats – but in the time-honored argument over what is more divisive, race or religion, Lupica says race takes the cake.

What is so strange about this piece is that Lupica stumbles upon all the factors that will play a role in unseating President Obama in the fall if he does lose the race – high unemployment, particularly among young people, gas prices and financial instability. But in his opinion, all that is subsumed by America’s once dormant racism.

“There were so many reasons to vote for Barack Obama, not nearly enough good reasons not to vote against the first black candidate for President. Not this time,” concludes Lupica.

What this article displays most is the terror of the realization that President Obama could lose in the fall. The resounding victory of Republican Gov. Scott Walker in Wisconsin on Tuesday made that reality tangible for the first time. The polls still show a competitive race, but President Obama has been unable reach the 50 percent threshold against Mitt Romney since early May in any head-to-head match up.

The numbers on the state level show a similar picture – Obama leading Romney in many key states, but is unable to secure 50 percent. And yesterday, Michigan’s respected local pollster EPIC-MRA releases a survey that shows Romney leading Obama 46-45 and moving Michigan into the tossup territory.

If America does reject its first black president – race will provide a convenient excuse for Obama’s supporters. It will be far easier to blame an uneducated electorate than to take a long, introspective look in the mirror.