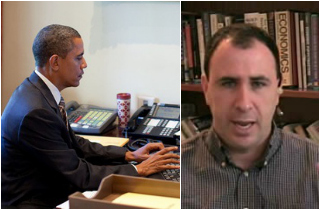 In the Huffington Post Monday morning, President Barack Obama blogged in support of the Employment Non-Discrimination Act, which shortly afterward picked up its necessary sixtieth vote to pass cloture in the Senate (though it’s almost certainly doomed in the House).

But the post sure did rile up a fellow blogger at New York Magazine. And not just any blogger: Jonathan Chait met with the president just last month, and is one of Obama’s regular reads. Miffed at a comment Obama made around the time of their meeting discouraging people from listening to the “lobbyists and bloggers,” Chait let loose on Obama’s poor bout of blogging tourism.

“What’s noteworthy about Obama’s blog post is not its conclusion, which I agree with, but its limp reasoning,” Chait wrote, adding:

A good blog post might cite and rebut some counter-arguments, throw in some hyperlinks, muster some evidence and maybe a little snark. Obama’s post does none of these things. It merely regurgitates the premise.

Obama likewise pads out his post with repetitive calls for Congress to pass ENDA. Given that he has already stated his endorsement of the law, calling for Congress to pass it is itself a redundant concept. Obama wastes precious Huffington Post blog space repeating this unnecessary idea.

[…] I would not normally concern myself with the literary merits of a single blog post, except for the fact that Huffpo inexplicably gave it such prominent front-page space. Arianna Huffington obviously knows how to attract an audience, but the decision to display such a weak op-ed is bizarre.

Chait finished with a (tongue in cheek?) bit of psychoanalysis, wondering if perhaps Obama had sneered at bloggers to mask his own fumbling at the form. “He resents bloggers because he is a failed blogger himself,” Chait wrote. “Obama should not quit his day job. Whatever that is.”

[Image via Wikipedia, Who2]