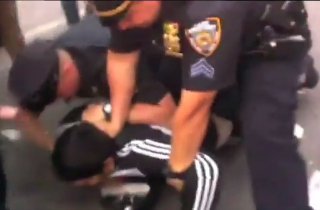 Another day, another potential NYPD abuse of power under investigation.

According to the indispensable ANIMAL NY, the New York Police Department’s Internal Affairs Bureau has launched an investigation after video emerged of a Sunday police scuffle with street vendors in the mostly-Latino neighborhood of Sunset Park, Brooklyn.

In the below video — originally posted to Facebook — police are seen confronting the vendors, informing them it is 6:00 p.m. and thus time to close up shop. That deadline presumably marked the legal end of the neighborhood’s annual 5th Avenue festival. After some words are exchanged, the encounter descends into violent chaos, with officers body-slamming and arresting multiple young men, while several onlookers also attempt to take on the police.

A black female officer can be seen yelling at the crowd that they “know the rules,” while a white male officer begins repeatedly asking an unidentified female “Who are you?” and “How old are you?” When a younger man in a Cincinnati Reds baseball cap tells the women behind him that they don’t have to answer any such questions, the cop gets in his face and things spiral from there.

As the violence becomes worse, the video shows cops punching and kicking the Reds hat-wearing man. Several other men are wrestled to the ground. Some can be seen attempting to skirmish with the cops.

It’s unclear why the situation escalated so quickly and so violently, but residents and local politicians are outraged. ANIMAL reports that city councilman Carlos Menchaca and Rep. Nydia Velasquez (D-NY) sent a stern letter to the NYPD:

You can watch the melee below and decide for yourself whether the street vendors posed a threat to the officers:

And here you can watch a Univision report (Spanish-language) with Sunset Park residents, including one elderly woman who claims her three fruit-vending sons were the men punched, kicked, and arrested.