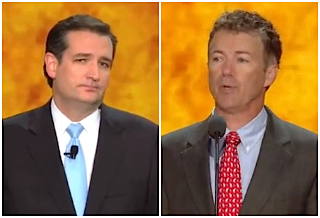 Who represents the future of the Republican Party, Texas Senator Ted Cruz or Kentucky Senator Rand Paul? The New York Times‘s Jonathan Martin attempts to answer that question in a front page article from Saturday’s paper that demonstrates how the paths of these two “tea party” senators have diverged over the last several months and what that split means for the GOP.

Martin describes recently developed “anger and resentment” between the two men, who in the past have considered each other “good friends” He reports that in private, Cruz has suggested that Paul could never be elected president because he will always be associated with her libertarian father, former Rep. Ron Paul. Meanwhile, he reports that Paul’s “inner circle” has called Cruz “the chief of the wacko birds,” perhaps in an attempt to distance themselves from the term coined by Sen. John McCain (R-AZ) to describe both men.

And as Cruz became even more closely aligned with the tea party after his anti-Obamacare “filibuster” last month, Paul has begun to embrace the “establishment” wing of the party, appearing at events sponsored by Karl Rove’s American Crossroads and campaigning with fellow Kentucky Republican Mitch McConnell.

Martin reports that after Paul privately admitted the government shutdown was a “dumb idea,” establishment Republicans are “lining up to heap praise on Mr. Paul, using words like ‘grown’ and ‘matured’ to describe him and the role he played during the shutdown.”

At this point, both senators are high on the list of probably 2016 GOP presidential candidates. With three years to go, they are already making strides to differentiate themselves from each other.