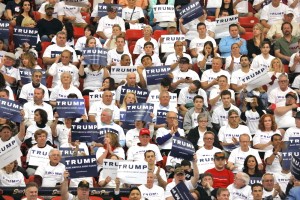 “I used to be Republican until I had a wake-up call. I realized the fate of the nation was way less important than people liking me!”

That’s one of my crowd-pleasing stand-up comedy jokes that is sadly funny because of how true it is.  In front of mostly liberal audiences in New York and Los Angeles where I’ve performed, the only way to not be booed off the stage when talking about politics is for me to basically pretend being Republican is crazy.  It’s essentially the same lesson Donald Trump supporters have learned.  In a media environment that every day finds new ways to report on “trumped-up” allegations that Trump is racist, misogynistic, homophobic and any other unflattering characterization one could imagine, is it any wonder that most people in polite society rush to publicly declare their disdain for the Republican presidential candidate? What they believe privately, I’d argue however, is an entirely different issue.

On this week’s Real Time With Bill Maher, guest Jim Gaffigan proclaimed “I’ve never met someone who supports Donald Trump. . . . I see them on the news, but I don’t run into people who are going to vote for him.”  Maher replied, “that’s a little bit of living in a bubble,” attempting to suggest that sure, in liberal circles no one promotes their support of Trump, but clearly these people have to exist somewhere. And this hesitation to admit to liking Trump extends to many more who likely see no benefit to such a pronouncement when mockery and scorn, either in public or on social media, would be sure to follow.

However, something strange has been happening to this Trump supporter, that I have verified is happening to several others as well.  Behind closed doors, in hushed voices, and after checking over both shoulders to confirm no one else is within earshot, people you would never expect are confessing to the strangest thing: they too will be voting for Trump.  Although such an admission typically comes after such often repeated caveats like, “I don’t agree with everything he says …” or “I’m definitely not a racist …” or “he might have no clue what he’s talking about …,” what matters is that when shielded from public judgment and when no one can see, people admit they actually like some of Trump’s common sense and arguably politically incorrect positions. Why this is significant is because of the most important dark place, where no one else is watching and where an individual’s opinion is safe from ridicule: the voting booth!

Just to prove this theory isn’t merely conjecture and based off of anecdotal evidence, let’s look at some numbers.  In the Real Clear Politics average rating of Trump’s Favorable/Unfavorable opinion polls, Trump’s unfavorable rating is 61% and his favorable rating is just 33%. Yet in the Real Clear Politics average for the general election against Hillary Clinton, right now Trump trails her by just four points, 44 to 40.  Sure Clinton’s own unfavorable numbers are a reason for why Trump remains legitimately competitive despite his historically high unfavorable ratings, yet a better explanation is because it ultimately seems more socially acceptable and “moral” for the typical voter to tell pollsters they disapprove of Trump, while still being open to eventually voting for him.  Furthermore, similar to the “Brexit” vote that caught pollsters completely by surprise, as voters hesitated to reveal their leanings towards what was deemed to be the “unpopular” choice before election day, a vote for Trump is also the anti-establishment and unpopular choice that voters could be holding close to the vest until our big day.

Of course a Trump victory is by no means guaranteed, but if Trump does win in November, don’t be surprised, just realize your neighbor, your friend, or maybe even you could have been part of the “silent majority” that helped elect him.  Your secret is safe with me.

Matt Schneider is a former lawyer turned comedian and writer. You can follow him on Twitter @SchneiderFactor.