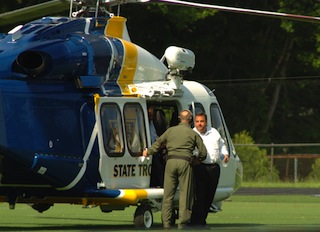 New Jersey Gov. Chris Christie is taking a little heat for taking time out of his day to go to his son’s high school baseball game, which is ridiculous. He was just being a good dad. Wait, what’s that? People are actually mad that he used a helicopter purchased for $12.5 million of tax payer money to get there? Well, that’s not that bad. He’s a busy guy and he didn’t want to miss the game. Besides, if you’re spending that much on the thing, you might as well use it. Wait, there’s more? He also required a limo to drive him the 100 yards from the landing site to the field? Oh. Yeah, that’s looks pretty bad.

From the Star Ledger:

“Right before the lineup cards were being exchanged on the field, a noise from above distracted the spectators as the 55-foot long helicopter buzzed over trees in left field, circled the outfield and landed in an adjacent football field. Christie disembarked from the helicopter and got into a black car with tinted windows that drove him about a 100 yards to the baseball field.

During the 5th inning, Christie and First Lady Mary Pat Christie got into the car, rode back to the helicopter and left the game. During a pitching change, play was stopped for a couple of minutes while the helicopter took off.”

Now, a lot of people are annoyed since the Governor has been so strident about making cuts to the state budget, but that’s clearly not the problem here. The problem is that this must have been terrible for his son. I mean, think about it! This is high school! High school students are mortified by their parents no matter who they are. You could be the governor, the president, or the King of Awesomevania and your kid would still be embarrassed by you. It’s a fact of life; if you’re a teenager, you don’t want your parents drawing attention. You want your parents to be wearing a Harry Potter invisibility cloak at all times so that the other kids can’t glean any more ammunition to make fun of you with. Hell, those kids are already razzing you enough for making Harry Potter references.

Just imagine what the kids in the dugout were saying! “Hey, man, hit a homer!” “Yeah, see if you can hit it high enough for Andrew’s dad to catch it in his giant freakin’ helicopter!”

So, forget the political problems. That’s not what’s really important here. What’s important is that Christie embarrassed his son. During prom season! Why didn’t he just run onto the field and clean schmutz off the kid’s cheek with his finger? This is like that time your mom walked into the school dance to tell you she was there to pick you up. Only instead of arriving in a dog-hair covered minivan, she arrived in a giant helicopter so every single girl in the grade heard her arrive.

Watch the report from MSNBC below:

(photo via Christopher Costa and the Ridgewood Patch)