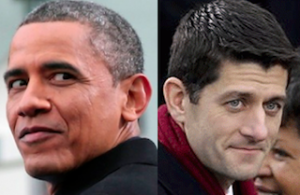 Congressman Paul Ryan had nothing but congratulatory words for President Obama yesterday. But less than 24 hours after the inauguration, the knives were back out.

This morning, Raymond Arroyo, who was filling in as host of The Laura Ingraham Show, interviewed the former vice presidential candidate about yesterday’s inauguration, saying “the president implicitly referenced you I think. At this moment during the inauguration, he was talking about Medicare, Medicaid and Social Security and how he means to continue spending on these things and strengthening them.”

Arroyo played a clip of the president speech, in which he said of those programs, “They do not make us a nation of takers; they free us to take the risks that make this country great.”

Calling the president’s rhetoric a “switcheroo,” Ryan responded, “No one is suggesting that what we call our earned entitlements — entitlements you pay for, like payroll takes for Medicare and Social Security — are putting you in a ‘taker’ category.”

While Ryan did not deny that President Obama referencing his own campaign talking points in the speech, he did express frustration at being willfully misunderstood. “When the president does a switcheroo like that, what he’s trying to say is that we are maligning these programs that people have earned throughout their working lives. And so it’s kind of a convenient twist of terms to try and shadowbox a straw man in order to win an argument by default.”

President Obama made his strong belief in preserving entitlements known in his inaugural speech, and by using Ryan’s words against him he set up what is expected to be a bitter battle with the Republican-led House over the future of these programs.

Listen to audio below, via Laura Ingraham: