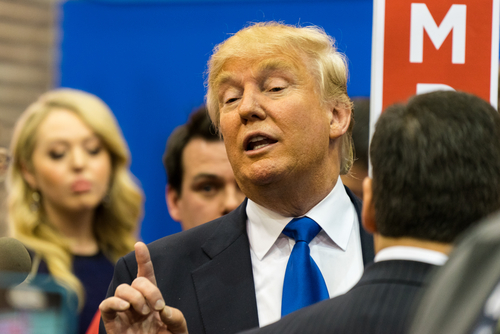 Today is International Women’s Day and the Day Without a Woman strike. The organizers of the strike are the same people who organized the wildly successful Women’s Marches that took place around the country following Donald Trump‘s inauguration in January and they announced the event in a Guardian article titled, “Women of America: we’re going on strike. Join us so Trump will see our power.”

In spite of — or perhaps because of — the fact that this is pretty clearly a movement designed, at least in part, to flex power in the face of Trump and what the organizers described “his aggressively misogynistic, homophobic, transphobic and racist policies,” the president issued two tweets on the topic of IWD today.

I have tremendous respect for women and the many roles they serve that are vital to the fabric of our society and our economy.

On International Women’s Day, join me in honoring the critical role of women here in America & around the world.

It didn’t take long for people to start responding to him, of course. Many responses focused on his healthcare policies, which many see as anti-woman. Some, though, pulled a Megyn Kelly and just repeated his old quotes on women back to him. The quips about never putting a wife to work, grabbing women “by the pussy,” and the importance of treating women “like shit” made frequent appearances.

@realDonaldTrump Is this your version of honoring women? pic.twitter.com/j9WiaHhKO4

@realDonaldTrump I join you in honoring women today and everyday.

But please don’t move on anyone “like a bitch” today. Okay? Not cool.

@realDonaldTrump You mean we should be critical like calling them pigs and dogs and 2s, right?

You can do anything, @realDonaldTrump. Grab them by the pussy. pic.twitter.com/rxSdNzwzWJ https://t.co/lyqTz6m6xd

@realDonaldTrump We know how you honor women. pic.twitter.com/wQqA7BgnDX

“Just kiss. I don’t even wait. And when you’re a star, they let you do it. You can do anything.” https://t.co/aJa2sg3czF

“If Hillary Clinton can’t satisfy her husband what makes her think she can satisfy America?” https://t.co/TzQtWS7fCE

“Grab them by the pussy.”

“Putting a wife to work is a very dangerous thing.” https://t.co/b80mNqfMD7

.@realDonaldTrump A true beacon of respect for women. https://t.co/Yxg4kJCR2s pic.twitter.com/WhQz4g67z4

.@realDonaldTrump from your own book, demonstrating just so much respect for women. pic.twitter.com/4KbgexGmO7

(Here’s an Indy list of other awful things he’s said if you want to make yourself sad: https://t.co/FoiemWZOtN )

@realDonaldTrump so much respect pic.twitter.com/hEz3gGXL1Y

“Sometimes I do go a little bit far,” he admitted, before adding, “Heidi Klum. Sadly, she’s no longer a 10.” https://t.co/PWZnjb6yjX