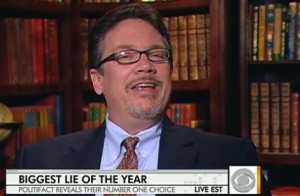 Pulitzer Prize-winning fact-checking website Politifact.com revealed its 2011 “Lie Of The Year” today, which is the essentially true claim that Republicans voted to end Medicare. While Politifact is taking heavy fire from liberals over its ridiculous decision, the site’s editor Bill Adair took to the airwaves to explain the award, and told a whopper of a lie himself on CBS News’ The Early Show Tuesday morning, while also demonstrating the central fallacy of the award, all in the same sentence.

Last week, I explained some of the reasons Politifact was off-base in even considering the Democrats’ claim a “lie,” let alone the “Lie of the Year.” The Paul Ryan budget plan, as Politifact happily acknowledges, changes Medicare from a defined benefit plan into a voucher program. With or without the qualifier “as we know it,” it is a subjective judgment whether it is entirely fair to call such a change the “end” of Medicare. As many others have also noted, Politifact doesn’t come close to meeting the burden of calling it a “lie.”

The fact that the Ryan plan doubles the amount seniors will pay for health care is almost beside the point. Once you uncouple Medicare recipients from their benefits, you have ended Medicare, and placed them at the whim of insurance companies. No matter how good the vouchers are (which is not very), you have declared open season on the benefits those dollars will buy, and the services insurance companies will choose to approve or deny.

Even if you grant all of Politifact’s subjective judgments about this claim, even they acknowledge that “at times, Democrats and liberal groups were careful to characterize the Republican plan more accurately,” which calls into question whether they should have zeroed in on the ads they found so troublesome. If most Democrats were careful to qualify their statements, why not fact-check those claims? Without any evidence to support this, Politifact alleges that “more often, Democrats and liberals overreached.”

That’s not how I remember it. I could be wrong, but every Democrat I saw on TV talking about the Ryan plan did say “ends Medicare as we know it,” or some variation. I don’t expect anyone to take my word for it, but then, neither should we take Politifact’s word for it that “more often, Democrats and liberals overreached.”

I can’t read minds, but if I had to guess, I’d say that this selection provided Politifact with an irresistible opportunity to prove its own “fairness” by “balancing” the site’s two previous Lies of the Year, both of which were Republican lies about health care. It’s a great narrative for a site whose credibility depends on the illusion that they’re impartial arbiters of truth, especially with “fact-checking” losing much of its luster over dubious rulings. That is not to say that “fact-checking” doesn’t have its place, but even Pulitzer-winning fact-checkers need to be evaluated on the merits.

RELATED: Rachel Maddow and Politifact Are Giving Me a Frakking Headache

In explaining his site’s ruling on this morning’s The Early Show, Politifact editor Bill Adair engaged in some pretty sick propagandizing for the Ryan plan, repeatedly insisting that it “protected” Medicare for those now 55 and older. Only in Bill Adair’s mind and on The Sopranos do you get credit for “protecting” something from your own assault on it.

But right in the midst of his backstopping of Politifact’s awful decision, Adair told an unmitigated, verifiable lie. He said the Ryan plan was trying to “change the plan and save money for people who were younger,” an assertion that’s belied by…Politifact.com:

Another problem with the ad is that it claims that participants would have to find $12,500 to pay for Medicare. That number is based on statistics compiled by the nonpartisan Congressional Budget Office. The ad doesn’t mention, though, that the number includes money that would go to Medicare in any case. The CBO estimates beneficiaries would contribute about $6,150 in premiums in 2022 if the program isn’t changed at all. So the extra money seniors need to pay under the Republican proposal is more like $6,350.

I’m no mathematician, but making people pay double isn’t the same as “saving money” for them, is it? Maybe we can put that in the running for next year’s “Lie Of The Year,” but in the meantime, somebody get that man a trouser extinguisher.