Poll: 59% Of Americans ‘Don’t Know Enough’ About Occupy Wall St. To Have An Opinion 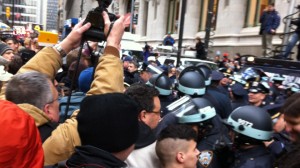 A new USA Today / Gallup poll reveals that, either despite or directly because of what seems to be a near-constant barrage of Occupy Wall Street news items from all sorts of ideological points of view, the American public is, to put it in layman’s terms, “super meh” about the whole endeavor.

According to USA Today…

The poll finds that 56% of Americans surveyed are neither supporters nor opponents and 59% say they don’t know enough to have an opinion about the movement’s goals.

The survey, however, does show an increase from 20% to 31% in disapproval of the way the protests are being conducted.

The protests have dominated the news cycle for some time now, from stories about the movement as a whole having reached a tipping point, to coverage and allegations of excessive police force and violence, to criticism of the people involved in the movement. And, it’s easy (and incorrect) to dismiss all coverage of the movement as being purely focused on its more sensational, infuriating and bombastic aspects, it is true that these are the “story arcs” that seem to get the greatest amount of mileage and attention, without really speaking to what the movement is or is not about, or what impact and resonance it could possibly have for Americans sitting in front of their TVs or computers. Then there’s the fact that the story contains so many tangential points and its own special vocabulary and reference points — What does it mean, say, to be part of the 99 percent? What is the 53 percent? What role do politics play in the movement? Why do I care what a pundit thinks about the movement if he or she won’t take the time to distill and explain what it’s about — that the whole thing tends to be very clouded and complicated. This, of course, assuming everyone is actually even tuning in to the news or seeking out OWS coverage to begin with.

What do you think of the poll results? Surprising, or just about what you expected?