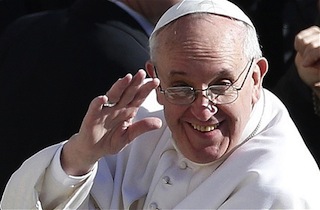 In the most substantive interview since he became Pope six months ago, Pope Francis spoke to the Italian Jesuit journal La Civiltà Cattolica and expressed remarkably frank and open opinions about homosexuality, contraception, abortion, women in the Vatican, and the Church’s “obsession” with conservative political issues.

His answers, which were given over three days, ran to 12,000 words and covered a vast array of topics, from his own biography to the evolution of Church dogma to controversial social issues. Most notably, he spoke at length on the need to be accepting of gays and lesbians, an elaboration of his earlier but more cryptic comments on the subject.

He said, in part:

The Pope was also quite blunt in denouncing the Church’s fixation on social issues, saying that the Church needed to reign in its social criticism in favor of a more minimalist mission of serving people, at one point referring to the Church as a “field hospital.”

“We cannot insist only on issues related to abortion, gay marriage and the use of contraceptive methods,” the Pope said. “This is not possible. I have not spoken much about these things, and I was reprimanded for that. But when we speak about these issues, we have to talk about them in a context. The teaching of the church, for that matter, is clear and I am a son of the church, but it is not necessary to talk about these issues all the time…The church’s pastoral ministry cannot be obsessed with the transmission of a disjointed multitude of doctrines to be imposed insistently. “

“We have to find a new balance,” Pope Francis continued, “otherwise even the moral edifice of the church is likely to fall like a house of cards, losing the freshness and fragrance of the Gospel. The proposal of the Gospel must be more simple, profound, radiant. It is from this proposition that the moral consequences then flow.”

“That’s just stunning,” said Eric Marrapodi, editor of CNN’s Belief Blog. “That is a course correction for the Catholic Church from what they’ve been on for a number of years.”

While Pope Francis said definitively that the door was closed to women priests, he did advocate a much larger and more respectful role for women within the faith. “Women are asking deep questions that must be addressed,” he said. “The church cannot be herself without the woman and her role.”

Watch Marripodi’s segment below, via CNN:

[h/t NYT; the interview was translated into English here.]