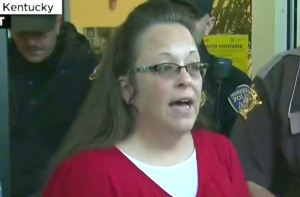 Here is the press release in full:

With all the controversy surrounding Rowan County, Kentucky clerk Kim Davis’ refusal to issue same sex marriage licenses even after the Supreme Court of the United States made same sex marriage the law of the land, The Dogfart Network which is the leading online destination for Adult Interracial content is offering the Holy Kim Davis a chance at redemption.

“We here at Dogfart have always believed in equality. We have interracial sites, gay sites, straight sites, and we think Kim Davis has been appalling,” said a Dogfart Spokesman. “We are giving her a chance at a redemption. We are willing to drop half a million bucks for Kim to come out to our studio and shoot an Interracial Lesbian scene for our network.”

The offer will stand for the next week. She is also welcome to bring her family with her on an all expense paid vacation.