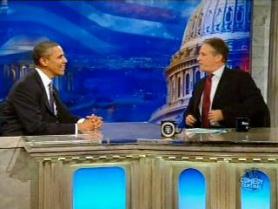 President Barack Obama tonight became the first sitting President to appear on The Daily Show, and the first guest to be interviewed for the entire show.

The wide-ranging discussion with Jon Stewart was heavy on politics, reflecting on the past two years (and the campaign) and had a few brief moments of disagreement between host and guest.

“This is a nice set,” said Pres. Obama at the beginning of the interview. “It reminds me of the convention.” It did look very similar to the Denver column set-up.

Stewart got right down to business. “You ran on high rhetoric, hope and change, and the Democrats this year seem to be running, ‘please baby one more chance,'” he said. Obama admitted things weren’t moving along as quickly as he had expected, and that people he works with told him when he was elected to “enjoy this now because two years from now folks are going to be frustrated.”

Stewart got in a shot shortly after, asked the President, “Are you planning a surprise party for us, filled with jobs and health care?”

The most contentious exchange was when Stewart used the word “timid.” He said: “You ran with such audacity…yet legislatively it has felt timid at times, that I’m not even sure what you want of out of the health care bill.” Pres. Obama responded:

Jon, I love your show, but this is something where I have a profound disagreement with you and I don’t want to lump you in with a lot of other pundits. This notion that health care was timid – you’ve got 30 million people that are going to get health insurance as a consequence of this, you’ve got a patient’s bill of rights that make sure insurance companies can’t drop you when you get sick…this is as significant a piece of legislation as we’ve seen in this country’s history.

Was it a little odd to see President Obama in the familiar Daily Show setting? Yes, but only by halfway. President Obama was on message, and it felt almost like any other interview he would have done with a Sunday show or cable news host. But it was Stewart who changed the mood: lighter at times, but also more pointed, as his jabs were ones a President is not often publicly used to fielding.

Here’s the 2nd segment, where the “timid” debate took place: