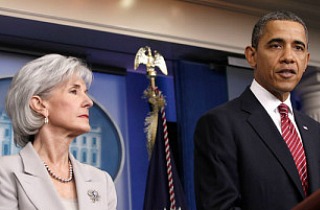 Health and Human Services Secretary Kathleen Sebelius has stressed that President Barack Obama was not aware of the problems associated with the Affordable Care Act prior to the launch of the ACA’s online insurance exchange portal on October 1, 2013. On Thursday, documents obtained by The Hill cast doubt on that assertion. An investigation by The Hill‘s Kevin Bogardus and Jonathan Easley revealed that Obama met with Sebelius at least 18 times in the year prior to the implementation of the ACA, often to discuss the health care reform law.

After reviewing 750 pages of documents The Hill obtained via a Freedom of Information Act request show that, between October 12, 2012, and October 6, 2013, Sebelius met personally with Obama. On seven of those 18 occasions, the two were slated to discuss the ACA’s implementation, according to Sebelius’ draft schedule.

The schedules suggest Sebelius was an active White House presence in the months leading up to the botched rollout, and raise new questions about why Obama wouldn’t have known about the problems that were exposed on Oct. 1.

“Less than a month later,” The Hill reports, “the Times ran a Friedman column about how the number of healthcare information startups was evidence Obamacare ‘already appears to be surprising on the upside.’ Friedman said in the piece that HHS connected him with the companies he profiled.”

Asked for comment, HHS told The Hill that Sebelius is a regular visitor to the White House, as the documents show, and that the implementation of the ACA requires coordination across many agencies and institutions in order to ensure that it rolled out smoothly.

In December, when a false report claimed Sebelius had visited infrequently, pre-ACA rollout, the HHS provided the following to Mediaite:

Read the full report via The Hill