President Obama: United States Will Continue To Be Friend And Partner To Egypt 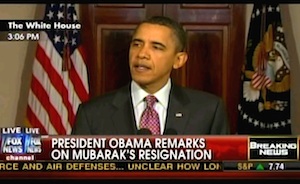 President Barack Obama spoke to the world wide audience eager to hear what the leader of the free world had to say about the stunning events that occurred earlier today in Egypt. Obama noted the historic moment by opening his comments “There are very few moments in our lives where we have the privilege to witness history taking place this is one of those moments this is one of those times.”

The speech was an excellent moment for both Obama and those hopeful for freedom across the world. The nuanced text put the responsibility for the nonviolent regime change in the hearts and souls of the people of Egypt, as Obama held them as a shining example, certainly for those neighboring countries that don’t have the same sorts of freedoms.

Obama also warned of the tough times to come, and no one really can be certain how this will work out in terms of democracy and freedom. But he chose to celebrate the very positive moments of the mostly peaceful revolution in a speech that is certain to be viewed historically as one of Obama’s bests.

Transcript of Obama’s speech (via WaPo) follows the video embedded below:

The people of Egypt have spoken, their voices have been heard, and Egypt will never be the same.

By stepping down, President Mubarak responded to the Egyptian people’s hunger for change.

But this is not the end of Egypt’s transition. It’s a beginning. I’m sure there will be difficult days ahead, and many questions remain unanswered.

But I am confident that the people of Egypt can find the answers and do so peacefully, constructively, and in the spirit of unity that has defined these last few weeks, for Egyptians have made it clear that nothing less than genuine democracy will carry the day.

The military has served patriotically and responsibly as a caretaker to the state and will now have to ensure a transition that is credible in the eyes of the Egyptian people. That means protecting the rights of Egypt’s citizens, lifting the emergency law, revising the constitution and other laws to make this change irreversible, and laying out a clear path to elections that are fair and free.

Above all, this transition must bring all of Egypt’s voices to the table, for the spirit of peaceful protest and perseverance that the Egyptian people have shown can serve as a powerful wind at the back of this change.

The United States will continue to be a friend and partner to Egypt. We stand ready to provide whatever assistance is necessary, and asked for, to pursue a credible transition to a democracy.

I’m also confident that the same ingenuity and entrepreneurial spirit that the young people of Egypt have shown in recent days can be harnessed to create new opportunity, jobs and businesses that allow the extraordinary potential of this generation to take flight.

OBAMA: And I know that a democratic Egypt can advance its role of responsible leadership not only in the region, but around the world.

Egypt has played a pivotal role in human history for over 6,000 years. But over the last few weeks, the wheel of history turned at a blinding pace as the Egyptian people demanded their universal rights. We saw mothers and fathers carrying their children on their shoulders to show them what true freedom might look like. We saw young Egyptians say, “For the first time in my life, I really count. My voice is heard. Even though I’m only one person, this is the way real democracy works.”

We saw protesters chant “selmeyah, selmeyah — “We are peaceful” — again and again. We saw a military that would not fire bullets at the people they were sworn to protect. And we saw doctors and nurses rushing into the streets to care for those who were wounded; volunteers checking protesters to ensure that they were unarmed.

We saw people of faith praying together and chanting Muslims, Christians, “We are one.” And though we know that the strains between faiths still divide too many in this world and no single event will close that chasm immediately, these scenes remind us that we need not be defined by our differences. We can be defined by the common humanity that we share.

One Egyptian put it simply: “Most people have discovered in the last few days that they are worth something. And this cannot be taken away from them anymore, ever.”

This is the power of human dignity, and it could never be denied. Egyptians have inspired us, and they’ve done so by putting the lie to the idea that justice is best gained through violence.

For an Egypt, it was the moral force of non-violence — not terrorism, not mindless killing — but non-violence, moral force that bent the arch of history toward justice once more.

And while the sights and sound that we heard were entirely Egyptian, we can’t help but hear the echoes of history, echoes from Germans tearing down a wall, Indonesian students taking to the streets, Gandhi leading his people down the path of justice.

As Martin Luther King said in celebrating the birth of a new nation in Ghana while trying to perfect his own, “There’s something in the soul that cries out for freedom.”

Those were the cries that came from Tahrir Square. And the entire world has taken note.

Today belongs to the people of Egypt, and the American people are moved by these scenes in Cairo and across Egypt because of who we are as a people, and the kind of world that we want our children to grow up in.

The word “Tahrir” means liberation. It is a word that speaks to that something in our souls that cries out for freedom. And forever more it will remind us of the Egyptian people, of what they did, of the things that they stood for and how they changed their country and in doing so changed the world.