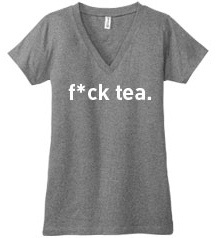 It is reasonable to assume that if someone saw a passerby wearing a shirt that boldly declared “F*ck Tea,” they would probably expect the reverse side to say something stupid like “Coffee Is The Sh*t!” In fact, these tea-damning shirts do exist, but the slogan on the back takes a political jab at a different type of “Tea”, stating “Progress Is The Real American Party.” Hear that, Rand Paul?

The Agenda Project, a group intent on strengthening and advancing the progressive movement in America, is behind the printing and distribution of the shirts. And as the group’s founder Eric Payne told Politico, they are meant “to dismiss the Tea Party and promote the progressive cause.” You can purchase the shirts for $22.50 on the F*ck Tea  website, where they can be customized in colors like Black Tea, Green Tea, White Tea, and Earl Grey – clever! There are even children’s sizes for the politically concerned toddler in your life.

For now, the merchandise is restricted to shirts and a coffee mug, but Payne expects new products – like a Glenn Beck toilet bowl cleaner – to be released in the coming months. While you wait, however, you can watch the Agenda Project’s Tea Party-bashing video, which combines statistics regarding the least progressive aspects of the Tea Party (example: 59% like Glenn Beck) and mashes them together with shameful photos of fanatics, all set to the aptly titled and delightfully upbeat Lily Allen song “F*ck You.”

Note: There aren’t any asterisks in the song to soften the blow of the swears, so play the video at your own discretion: