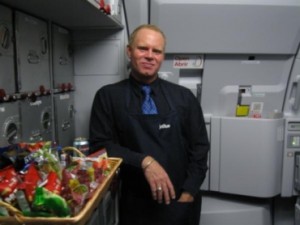 Do you remember the first time you heard that George Washington didn’t actually chop down that cherry tree? Or when you discovered that not everything in Bob Dylan’s “The Hurricane” was entirely factually accurate? That’s how we feel right now as we watch a legend crumble around us and a soaring hero get brought crashing down to earth. You see, dear readers, the Wall Street Journal is reporting that Steven Slater, the courageous flight attendant and battler of rude customers might have actually been the rude one after all. You hear that noise? That’s the sound of my inner child dying.

As the legend goes, a customer accidentally hit Slater with her suitcase. When he asked for an apology, she told him to “f**k off,” he returned the expletive over the PA, grabbed a couple brewskis, and made his Looney Tunes-style exit down the emergency slide. Well, the Wall Street Journal talked to three passengers of the flight whose versions of the tale threw Slater in a much less positive light.

From the Wall Street Journal:

“Marjorie Briskin, a 53-year-old schoolteacher from Pittsburgh, said she was deplaning in John F. Kennedy International Airport around noon Monday when Mr. Slater and a woman walking in front of her got into a heated conversation over the woman’s luggage. She said the passenger, who appeared to be in her 20s, asked Mr. Slater where her bag was stowed.

Ms. Briskin said the seemingly normal conversation turned unexpectedly nasty when Mr. Slater blurted out an expletive to the passenger.

‘I didn’t think she was rude in the least,’ said Ms. Briskin, who was visiting the city for the first time. ‘It really blew my mind. It was so inappropriate.’

Ms. Briskin said Mr. Slater sported a ‘nice gash’ on his head for most of the flight, during which there were no problems until the end, when she said Mr. Slater began methodically opening the overhead bins and then slamming them shut.

‘He looked disturbed at that point,’ she said.”

Whoa, whoa, his gash may not even be from the falling suitcase? Oh my God! I don’t know what to believe about anything anymore!

The other two passengers interviewed present equally unflattering accounts. Maybe it doesn’t matter though. As history has taught us,* sometimes the story is more important than the man. Sure, if these stories are true, Steven Slater the Flight Attendant isn’t everything we hoped he was, but Steven Slater the Legend always will be and, therefore, we must make sure that his story lives on.

When the inevitable Slater backlash goes into full swing (sure, to be hastened once he signs a TV deal or something) we all must look past the hate and actual facts of the case and remember how the story originally made us feel because that is what truly matters.

*For “history,” read The Dark Knight and that episode of The Simpsons where Lisa finds out that Jebediah Springfield was actually a jerk.