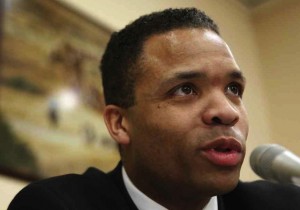 Yesterday federal prosecutors officially filed charges against former Congressman Jesse Jackson, Jr. for violting campaign finance laws and misusing campaign contributions for personal expenses. The federal investigation into Jackson resulted in his sudden resignation from office last November, and in addition to the former congressman, the government also filed charges against Jackson’s wife over allegedly filing false tax returns. Jackson has already plead guilty to the charges and faces a prison sentence of up to five years.

Documents released by prosecutors list in some detail precisely what Jackson illegally purchased with campaign contributions, from a $43,350 gold-plated Rolex watch to almost $10,000 in children’s furniture to the following memorabilia, according to The New York Times.

The buying of memorabilia with campaign funds continued in 2010 when Mr. Jackson bought Jimi Hendrix memorabilia for $2,775 and the Michael Jackson fedora for $4,600 that March.

The prosecutors said in the documents that Mr. Jackson would forfeit all of the memorabilia and the furs to the government.

Jackson served in Congress from 2007 up until his resignation last year. The Times reports that he faces up to five years in prison and $250,000 in fines as part of a potential plea deal, while Jackson’s wife faces up to three years and a $100,000 fine.