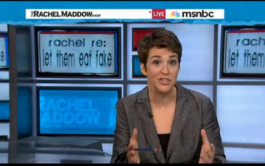 Rachel Maddow is uncovering a ‘scandalous’ trend. On Thursday the Attorney General of California Edmund G. Brown Jr. released a statement saying an investigation into James O’Keefe’s now infamous ACORN tapes revealed that “some members of the community organizing group ACORN engaged in ‘highly inappropriate behavior,’ but committed no violation of criminal laws.”

After watching the unedited tapes, which were never released to the public, Brown concluded that “the evidence illustrates, that things are not always as partisan zealots portray them through highly selective editing of reality. Sometimes a fuller truth is found on the cutting room floor.”

Too bad the cutting room floor takes so long to come to light! Meanwhile, part of that “highly selective editing” resulted in the impression that O’Keefe had entered the ACORN offices in outrageous pimp garb, but this was not the case. He was actually dressed in a in a shirt and tie and “presented himself as a law student.”

Yeah. Too bad the offices have already been closed nation-wide. Said Rachel Maddow on Friday: The whole premise of the attack on the ACORN offices was false. This guy dressed up as a pimp, went into the offices and they gave him straight up advice as if that was normal. Actually, no, he was dressed up like a law student and they called the cops on him.”

Maddow goes on the compare the “bogus” ACORN scandal to Climategate, “that made-up controversy promoted by climate change deniers and promoted on Fox News Chanel” which was also disproved this week. Which did you hear more about, Maddow wants to know, the scandals or the conclusion they were fake? Video below.