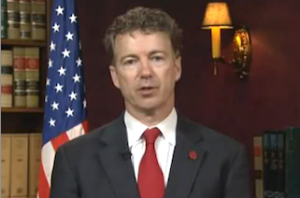 Sen. Rand Paul (R-KY) cautioned against U.S. military action in Syria Wednesday morning during an appearance on Chris Stigall’s Philadephia-based radio show. He said “questions” remain on which side of the Syrian conflict used chemical weapons, saying, “there is a great incentive for this to actually have been launched by rebels, not the Syrian army.”

Paul fought back against suggestions from the White House that the Obama Administration could launch strikes against Syria without congressional approval. “The Constitution mandates that Congress declare war, not the president.” He predicted that President Obama would say “dropping a few cruise missiles isn’t war,” but said it the U.S. getting “more involved” would be almost inevitable.

“We’re not playing a game here,” Paul said, arguing that intervention in Syria could prompt a war with our “ally” Russia with whom we “went through 70 years avoiding war.” He said “people need to think these things through” before moving forward with any action.

Quoting Pat Buchanan, Paul asked, “Cui bono? To whose benefit is this? All of this redounds back to this is to the benefit of the rebels because now it’s bringing other people in on their side. So there is a great incentive for this to actually have been launched by rebels, not the Syrian army.”

Listen to audio below, via WPHT: