Rep. Steve King Tells Congress He Is A Victim Of Profiling As A White Man In A Suit 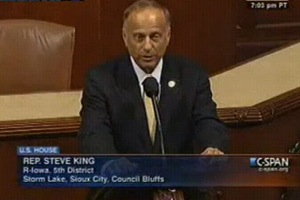 When the new Arizona immigration law was first passed, a provision giving police the authority to check immigration status when faced with visual evidence that a suspect is in the country illegally caused controversy because even the state’s governor, Jan Brewer, admitted she didn’t know what an illegal immigrant “looked like.” On the House floor today, Iowa Rep. Steve King argued that “looking illegal” isn’t about race– it’s about “common sense.”

“Profiling has always been an important component of legitimate law enforcement,” explained King, noting that finding patterns in criminals and criminal activity were pivotal to preventing crime. He also noted that profiling went beyond race, and beyond law enforcement. “We all get profiled,” he explained, giving an anecdote of his extensive experience as a victim of profiling, of years of taxi drivers stopping for him before he has to hail a cab, because he is a white man in a suit. Then he explained that what many in law enforcement would be using to find illegal immigrants would be profiling, but not necessarily racial:

King was already in trouble with some Tea Party groups for saying that President Obama “has a default mechanism in him that breaks down the side of race, on the side that favors the black person,” on the G. Gordon Liddy radio show.

Video of his comments on the House floor below: