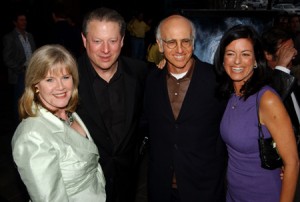 Take this with a grain of salt. The tabloid Star Magazine (ok, let me change it from “grain of salt” to “more salt than an entire New York pretzel cart”) is reporting that Al and Tipper Gore’s divorce may have been caused by an affair that Al had with Laurie David, one of the producers of An Inconvenient Truth. What makes the allegations more interesting (or at least makes the headline more interesting) is that David is the ex-wife of Seinfeld and Curb Your Enthusiasm creator Larry David.

Here’s how Star puts it in their tease for the next issue:

In the June 28 issue of Star, on sale Wednesday, we report that Al and Tipper’s breakup didn’t come as much of a surprise to one Hollywood player — Laurie David. Star has learned that Al has been having an affair with Laurie, who divorced Seinfeld creator and Curb Your Enthusiasm star Larry David in 2007 amidst reports she was cheating with the caretaker of their Martha’s Vineyard summer home.

‘Al and Laurie went from friends to lovers,’ an insider tells Star. ‘It couldn’t be avoided.'”

God, an insider. Those folks know all the dirt. Laurie David has already denied the report to the Huffington Post:

“‘The story is completely untrue,’ David told Huffington Post. ‘It’s a total fabrication. I adore both Al and Tipper. I look at them both as family. And I have happily been in a serious relationship since my divorce.'”

This is all just silly gossip, of course, but there’s at least one part of the story that’s guaranteed to be true: Larry David has the makings of his next great Curb storyline…