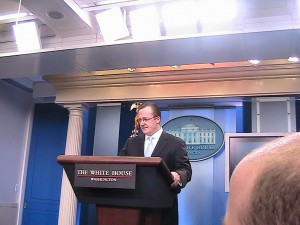 The Hill’s Sam Youngman published an interview this morning, with White House Press Secretary Robert Gibbs, that has touched off an angry response from liberals. Speaking about liberal critics of President Obama, who have gone as far as comparing him to George W. Bush, Gibbs “unloaded” on what he calls “the professional left.”‘

Reaction from liberals on Twitter has been fast and furious, while conservatives are no doubt trying to decide who to root for. This being August, I think we have our story of the week.

In his interview with Youngman, Gibbs takes a blunt view of the administration’s critics from the left:

“I hear these people saying he’s like George Bush. Those people ought to be drug tested,” Gibbs said. “I mean, it’s crazy.”

The press secretary dismissed the “professional left” in terms very similar to those used by their opponents on the ideological right, saying, “They will be satisfied when we have Canadian healthcare and we’ve eliminated the Pentagon. That’s not reality.”

Of those who complain that Obama caved to centrists on issues such as healthcare reform, Gibbs said: “They wouldn’t be satisfied if Dennis Kucinich was president.”

In the big picture, I have to say, I’m mostly with Gibbs on this one. The energetic base that swept Obama into office did so with a truckload of unrealistic expectations.

I agree that the administration should have been able to get a public option into the health care reform law, but beyond that, it’s hard to argue that Obama is very far away from where he said he would be if he got elected. Considering the lock-step opposition, and the tendency of his own party to undercut him, it’s a miracle Obama has gotten anything done.

I would quarrel, also , with the idea that the “professional left” wants “Canadian healthcare” and to “eliminate the Pentagon.” I get that Gibbs was employing shorthand hyperbole,  but it feeds into decades-old stereotypes about liberals that don’t really hold true anymore. Most liberals favor a common-sense approach to a strong national defense, and would be perfectly happy with a public health insurance option, or Medicare for all.

Politically, though, this is not the best move. The biggest challenge the Democrats face in the mid-terms is an energy gap. The Lipton-fueled conservative base is fired up, and ready to turn out. Judging by the swift, sullen reaction thus far, Gibbs’ rant seems to have thrown cold water on the liberal base.

If they’re smart, conservatives will pop some corn, pull up a chair, and let them duke it out. If liberals are smart, they’ll realize that maybe Gibbs has an inartfully-made point, and that the surest way to see a government more like that of George W. Bush is to stay home and sulk in November.

Update 2: Gibbs admits he watches too much cable, and clarifies his “inartful” remarks, in a statement to Huffington Post’s Sam Stein.