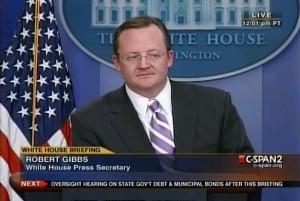 Apparently, Lawrence O’Donnell isn’t the only one who needs a Sarah Palin translator. At Wednesday’s White House briefing, I asked Robert Gibbs if he thought Palin’s remarks to CBN, in which she suggested President Obama doesn’t know “what America stands for,” were a dog-whistle to the Birther movement, questioning the President’s American-ness, and if this was a taste of the looming 2012 presidential campaign. Gibbs, like many, didn’t know what Palin was trying to say.

Attacks on President Obama’s status as “one of us” are nothing new, dating back to the 2008 Democratic Primary campaign, and ratcheted up significantly once Palin joined John McCain’s campaign in the general election. Questioning opponents’ patriotism is also old hat for the GOP, but the “birther” movement, people who believe that the President’s US citizenship is in question, has fueled a deeper attack on Obama’s character.

Palin’s remark doesn’t specifically reference the President’s birth certificate, but her remarks are of a piece with the drumbeat that not only is the President un-American, he’s actually an enemy, determined to weaken our country. Remarks like these, and Palin’s comments to CBN, play well to multiple audiences, but especially to birthers, a voting bloc that other Republicans have proven afraid to offend. The Birthers’ level of discredit makes it risky to actively court them, but not-so-subtle messages like Palin’s hit the mark, while retaining some Birther deniability.

Robert Gibbs, and the White House, seem determined not to be drawn into an early campaign with Palin, and Gibbs’ dismissive attitude may indeed be as much a harbinger as Palin’s remarks. The difference is, once the campaign starts in earnest, it won’t need to be Gibbs calling this stuff out.