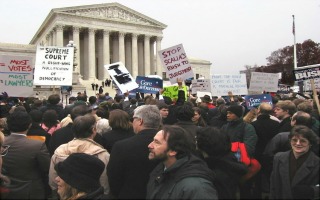 Supreme Court Chief Justice John Roberts has been the subject of intense scrutiny since he shocked the political world on Thursday by siding with the court’s left-leaning justices in upholding health care reform. Some have speculated that, given the contradictory nature of his opinion on the case, Roberts had posterity in mind and not the law when he made his decision. There is merit to the argument that he was stewarding the reputation of his and future courts. But it is less likely that Roberts was thinking about the legitimacy of the court than the comity of the nation when he handed down his verdict. History is littered with Supreme Court cases that inflame conflicts rather than mollify them – Roberts’ decision ensures that the health care reform case will not be among them.

Much of the post-decision analysis has attempted to divine what Justice Roberts could have been thinking in composing the majority opinion. Some observers have noted that the decision on the mandate was closer to 4-1-4 rather than the official 5-4 because Roberts joined the dissenting justices in noting that the Commerce Clause could not justify the individual mandate.

My colleague Frances Martel performed an excellent dissection of Roberts’ opinion and found it vexing that Roberts spent much of his decision contradicting his own findings in the case.

So, what are we to make of Roberts decision? Some have speculated that he was not merely determining the fate of the law but of his and future courts. There could be some truth to this, but there is also a slightly less tribal explanation for what happened at the Supreme Court on Thursday.

Roberts may have been aware of the tragic Supreme Court decisions in American history which furthered discord rather than resolved it. National Federation of Independent Business v. Sebelius could have been another of those fateful decisions had Roberts joined with the dissenting justices who recommended the entire law be scrapped.

The history of Supreme Court decisions which greatly alter federal law is mixed — the court almost never has the final say on the most divisive of cases. Some conservatives have likened this court’s decision to that of the Dred Scott v. Sandford (1857). In truth, there is a case to be made that this is an apt metaphor — but not because, as some conservatives suggest, it was a disastrous decision. Rather, it was Robert’s maneuver in this case that prevented the crises which followed the Dred Scott decision.

Dread Scott resolved no conflict, as Supreme Court decisions are intended to do. Rather, it inflamed the conflict between Free Soil Republicans, abolitionist Whigs and state’s rights Democrats. It took the Civil War to fully resolve the challenges that slaves as property, codified into precedent by Dread Scott, presented.

Similarly, the Supreme Court enshrined the discriminatory practice of “separate but equal” in Plessy v. Ferguson (1896). This set up a half-century of brutal racial conflict that reverberates to this day. Brown vs. Board Of Education (1954) may have desegregated public schools, but it did not end the debate surrounding the legitimacy of “separate but equal.” That required Civil Rights-era legislation to undo permanently — and all the conflict, assassinations and civic turmoil that came with it.

The court overturned 46 state laws in the 1973 Roe v. Wade decision which prevented the criminalization of abortion practices. While both sides of the abortion rights issue can argue over the correctness of that decision, all can agree that it did nothing to ameliorate the conflict surrounding that controversial practice of abortion. If anything, that decision exacerbated that conflict. Had health care been repealed in total, the cause of universal health coverage could have suffered the fate of the eternally divisive decision in Roe with its supporters forever claiming to have been robbed by the court.

In 2000, it was the Supreme Court that ended the ongoing recounts in Florida that prevented the United States from being able to declare a winner in that year’s presidential election. By that December, it seemed as though the crisis could stretch into the new year and perhaps even past inauguration day. The court acted and halted the recounts, effectively declaring George W. Bush the winner of that year’s election. To this day, or rather this past Monday, scholars continue to argue over the legitimacy of the court’s decision in Bush v. Gore. Grassroots political activists on both sides will debate over this court-imposed electoral outcome for generations to come.

Beginning in 2011, Democrats and their allies made it clear that they viewed the court’s decision in the health care case as an extension of the controversial decision in Wickard v. Filburn (1942) which allowed the government to regulate the growth of wheat crops that were intended only for personal consumption. While Roberts rejected the fundamental justification for that decision, namely the Commerce Clause’s ability to regulate even that practice, the precedent weighed heavily on this court.

The Supreme Court, a coequal branch of government with no more claim to legitimacy than the executive or legislative branches, invites trouble when it invalidates the will of the people made manifest in federal law. The history of similar broad exercises of judicial power – as recommended by the dissenting justices in this case – is not pretty. It took an electoral mandate to deliver health care reform in its present incarnation and it will take an electoral mandate to do away with it.

In essentially abstaining from determining whether health care reform is legitimate, Roberts has allowed the American people to once and for all settle the question at the ballot box. This has been and remains the only way to ensure lasting national comity. Roberts made the right decision in this case and his foresight has earned him a place in history.